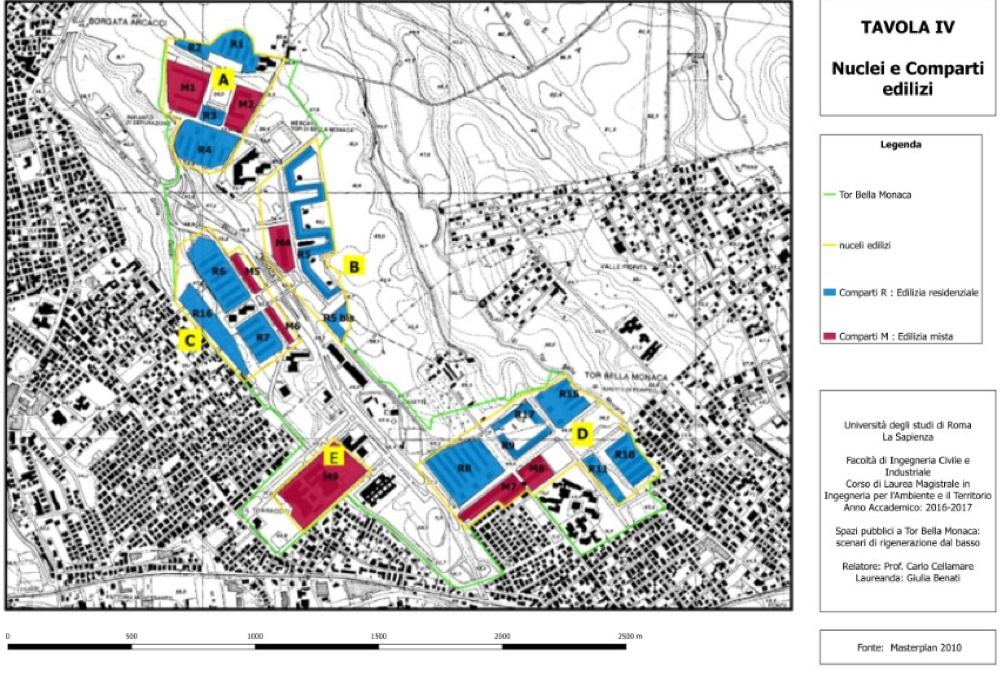 “We’ll raze Tor Bella Monaca to the ground and rebuild it from scratch, people are happy of it,” mayor Alemanno announced after his election in 2010.[1] The plan was never approved, and few things have changed in this suburban district in the south-east of Rome, still synonymous with illegality and problems. Rome’s newspapers relate Tor Bella Monaca to episodes of drug dealing and criminality instead of a deeper understanding of the territory. This article briefly introduces the results of mixed-method research conducted in 2018, looking at the hidden planning potential of the area.

This neighbourhood shows a sharp contrast between a strong community network and the highest number of people under house arrest in Rome (250 adults). A troublesome context can easily distract from opportunities and solutions. Drug rackets and easy money attract young people; 15 % of minors are under judicial orders, and one-third of the 28.00 inhabitants, [2] mostly living in relative and absolute poverty, has criminal records. An actual ‘Territory of Poverty’ [3] that counts low education levels and the highest number of low-income families in Rome.[4] Only 3% of the population has a university degree. The early school drop-out rate is high, and the employment level is the lowest of the Italian capital: 37%, eleven points below the average of Rome of 48% in 2011. Similarly, unemployment is 19% against an average of 9.5%. [5][6]

The social barrier depends on a center-periphery fracture that is primarily physical. The location contributes to a concrete relegation often described by the documentaries and set of movies, which is also psychological and financial. To make ends meet, a part of the population supports the cocaine traffickers storing cocaine in their homes for instance.[7][8]

As other examples of social housing complex, Tor Bella Monaca became synonyms with something allegedly negative. And data support this narration often exacerbated by media and used by politics. Nonetheless, the infield analysis presented in this article sheds light on the material and immaterial resources hiding in the informality of the community habits, abandoned urban layout, and social activism. Before doing so, the article retraces the history of a top-down planning approach that co-created the same peculiar settings now blamed by policymakers and experts.

Emergency planning and co-creation of a problem

“To relegate (from the late Middle English, relegaten, meaning to send away, to banish) is to assign an individual, population, or category to an obscure or inferior position, condition, or location.” [9]

Was better planning possible? This territory was at the center of political, economic games, and it represented the only solution to live for many. The inadequate urban planning mainly results from the action of public authorities and private developers and a context of informality due to massive migration. During the housing crisis in the 30s, people living in abusive barracks, cheap labor force from the surrounding rural areas, and the South of Italy were offered this physically isolated housing complex by the Fascist regime next to war factories. In the following decades, public action consisted of passively legalizing informal settlements. In the 1950s, residents privately upgraded their home into 5 store buildings. It was only in the 1960s that primary services, such as sidewalks, water, and sewers, slowly caught up with the urban development of the area.

The planning intention of the government was conflictual in the 1970s. The disagreement between city authorities and the regional government impeded the construction of public infrastructure key to connect the districts in the east side of Rome.[10] Tor Bella Monaca’s new social housing complex was built between 1981 and 1983, with the double aim of providing homes for many evicted households and redeveloping the eastern sector of the suburbs, whose planning had been compromised by informal settlements.[11] This is how the construction of the massive complex counting the iconic 22 grey towers took place.

The government crammed as many people as possible in the neighborhood for the many affordable housing applicants. People moved in those towers still standing today as cathedrals at the margin of the countryside, distant more than 20 kilometers from the city center. A great transverse road bisects the area dividing the residential areas into parts (the area in blue in the map), making the use of cars necessary even for local mobility.[12]

A bomb of protest was about to explode. On the one hand, the new neighborhood was lacking primary services such as schools, shops, proper public, and transportation. On the other hand, the area gathered the most fragile categories as assignees of the public housing such us evicted families, destitutes, newly formed families, elderlies, and families with disabled people. Not surprisingly, the situation became critical. A few months after the inauguration of the complex, the protest group Comitato di Lotta formed in 1984. The social housing residents occupied the main street connecting to Rome city center, via Casilina, to obtain a bus to get the basic needs. It was only the first of a long series of protests that  are still going on today.

Arriving at Tor Bella Monaca, visitors see with their own eyes the visible contrast between the above mentioned disastrous quality of life indicators and the atmosphere of collaboration and commitment to local social events. Differently from the privateness of wealthy neighborhoods, residents live actively their public spaces.

An intense activism is present, and many residents try to improve the quality of their everyday life by participating in committees or with their spontaneous and mutual support. Catholic charities, associations like the community library Cuba Libro, the social center ElChentrothat gives after school assistance and recently supported the street art regeneration project ColorOnda-, or TorPiùBella are among the vast and rich associative landscape of the neighborhood. They boost a strong community spirit that stands as a lotus in a muddy pond being a survival strategy for many. Initiatives of resilience and community welfare are a horizontal collaboration where community, high schools, and NGOs partner for events, public space maintenance, and artistic projects for free. Re-appropriation of public space is not only physical but ‘symbolic’.[13] Painted walls give hope and positive message for the many kids; for some families, the cultural and artistic activities offered by the associations are the only affordable amenities they can access for their children.

The map above highlights areas of public interest, such as green areas, sports facilities, parking, or other collective areas. The apparent decadence of the urban layout, hides the material resources of the area. A solely quantitative analysis of the Master Plan shows excellent potential for the area. The number of public spaces and green areas overpasses by far the minimum surface provided for  by urban standards. Moreover, by measuring the surface through digital photo-interpretation and direct investigation, it surpasses by far the urban standards.[14]

Despite the vastness and relative importance of the total space of the neighbourhood, the inhabitants claim they do not have enough. How is it possible? The answer resides in their quality. Interviews and site visits showed several weaknesses. The lack of maintenance, presence of criminal activities, and high-speed streets make public space not always usable. A car-centered design and the lack of general connection among the different components of the district isolate the social life. All these elements combine in a vicious circle. The lack of maintenance favours the use of the space for criminal activities, which in turn enhances the lack of maintenance; the lack of connections makes the district car-centric and vice-versa, so the pedestrian frequentation of public spaces is discouraged.

Quantity without quality is not enough. Public spaces have a high potential for better planning, because of its unusual abundance, and because of the fervent social movement that enlivens the territory. Tor Bella Monaca was planned without thinking about how to govern it. The European project “Urban” [15] brought great vitality and a new theatre to the neighbourhood for a few years in the 1990s. Though, similarly to other projects, it lasted for a short time. Despite their innovation, the life and creation of Tor Bella Monaca have been subject to a ‘spatial and temporal discontinuity’ from the public action that has limited its economic development.[16]

Within precarious conditions, social life self-organized. Existing practices, including criminal activity, show where there is a need to develop economically and socially. NGO’s and the community took over public spaces organizing their use. But their action is often dependent on the state, owner of the land, that has to give more continuity in enabling and encourage the action of those actors that have developed a vast knowledge of the territory and established a resilient community. Given restrict budget and staff, the survival of these virtuous actions depends on an institutional dimension to survive in the long term.’ [17]

Supporting these actors to give new life to the existing material potential can bridge the physical and mental boundaries that separate the territory. The arrival of the metro in 2016 nearby is a bridge to escape to other areas for some. However, occupation and opportunities on-site would help moving out from a perceived feeling of peripherality. Solutions for a multi-ethnic and complicated area do not come in pre-packaged Masterplans; history teaches us. No proper plan arrives from the top when the needs of those at the bottom are not carefully listened to.

[9] Wacquant, L. (2015) ‘Class, Ethnicity, and State in the Making of Marginality: Revisiting Territories of Urban Relegation’ in Roy, A., Shaw Crane A.(2015) ‘Territories of Poverty: Rethinking North and South’. University of Georgia Press, 2015. JSTOR. www.jstor.org/stable/j.ctt189tszc

[11] Cremaschi (2012) ‘Perspectives on Public Space in Rome, from Antiquity to the Present Day. LONDON:Ashgate

[12] Cremaschi (2012) ‘Perspectives on Public Space in Rome, from Antiquity to the Present Day. LONDON:Ashgate

[14] Urban standards are a measure expressed in [mq/inhabitant], and for the Italian urban law there is a minimum amount of these standards that has to be met for each listed urban services (such as green areas, public spaces, parkings, sport facilities, collective activities etc.) in every urbanized area of the national territory, for these parameters are supposed to assure a certain quality of life

Cremaschi (2012) ‘Perspectives on Public Space in Rome, from Antiquity to the Present Day. LONDON: Ashgate

Wacquant, L. (2015) ‘Class, Ethnicity, and State in the Making of Marginality: Revisiting Territories of Urban Relegation’ in Roy, A., Shaw Crane A.(2015) ‘Territories of Poverty: Rethinking North and South’. University of Georgia Press, 2015. JSTOR, www.jstor.org/stable/j.ctt189tszc