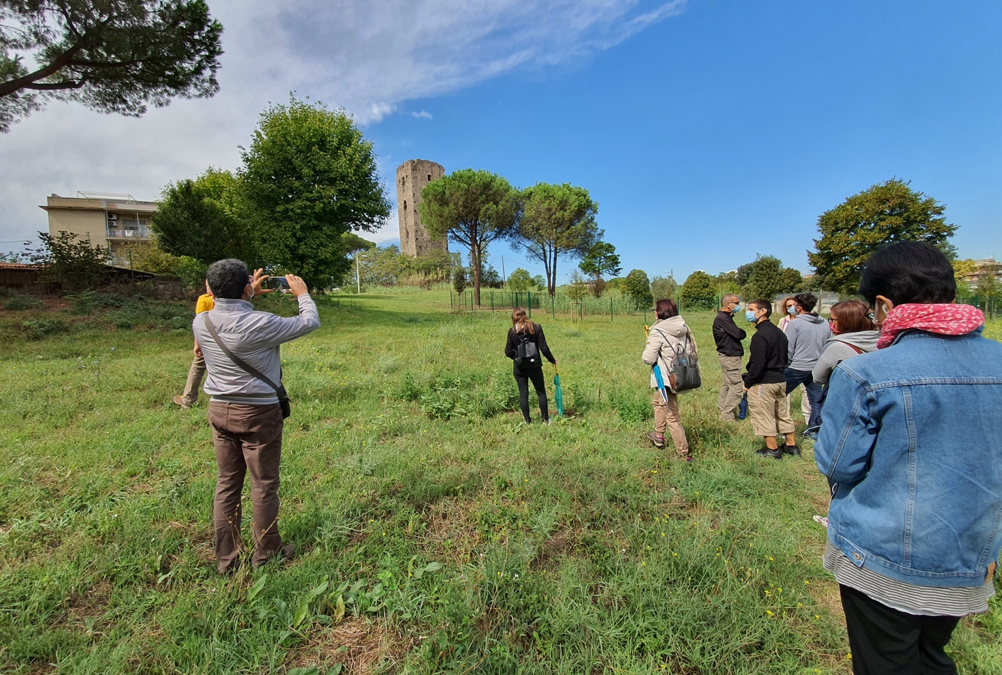 Guided tours in the Agro Romano towards the origins of Roman villae, Torre Spaccata’s ‘Pratone’ and San Giovanni’s Tower for the participants of the European Heritage Days initiative.

Within the framework of the European Heritage Days 2020 and the activities of the European project OpenHeritage, Co-Roma representatives together with the community of the co-district “Alessandrino-Centocelle-Torre Spaccata” (ACT) located in South-East Rome, accompanied the participants along an itinerary to discover the cultural heritage of the district, also thanks to the cooperation of CooperACTiva and the Community for the Public Park of Centocelle (CPPC).

The first Heritage Walk route started from Parco Rugantino and then headed towards Casale di Torre Spaccata, an ancient abandoned farmhouse built in an area rich in Roman archaeological remains, scattered within Torre Spaccata Great Park (“Pratone di Torre Spaccata”) itself, unfortunately not (yet) visible to visitors. In fact, in spite of the numerous excavation and research projects undertaken in the South-East Rome quadrant – which mostly corresponds to the territory of the ACT district – none of these has made it possible to enhance and make available to the public the archaeological remains found, which show ancient settlements dating back to Roman times and in particular the existence of patrician villae that extend along a large part of the promenade route.

During the stop at Pratone di Torre Spaccata, together with the guide, the participants ventured inside the path traced by the inhabitants of the district and built inside the green area, which is imagined to become a future cycle-pedestrian area and now used as a public park at the crossroads of the district areas. However, the cycle-pedestrian area idea at the moment remains only potential.

Along the route, the last stop led participants to discover the history of the Tower of San Giovanni and its medieval origins.

Built at the end of the 13th century (1200-1300), like other tower-houses in the Roman countryside, the Tower was placed in control of the nearby via Casilina. In ancient times it was known as “Tor San Giovanni” because the estate on which it still stands belonged to the Chapter of San Giovanni in Laterano, as a territory of the Papal States. Only at the end of the 17th century (1600-1700) the Tower took the name “Torre di Centocelle”, because of the ruins of the nearby Roman villa of the Emperor Valentiniano, which seems to have had an infinite number of small rooms (cellae).

The Tower is over 25 metres high and is surrounded by a grove of pine trees that are now centuries old. It represents a favourite destination and place for many artists and photographers over the last two centuries.

The itinerary of the second Heritage Walk (postponed on Saturday 10th October due to bad weather) led participants to discover the Archaeological Park of Centocelle and its history.

Starting from the car park in Via Casilina and along a route about 2.3 km long, the events and testimonies of the Park have been narrated to participants: from the rural villas of Roman times that re-emerged during the archaeological excavations carried out between the end of the nineties and the first two thousand, to the “first flight” of Wright on the runway inside the Park.

The walk was an excellent opportunity to make known the traditions and events that characterize the area, even to citizens who do not live in the area, handing down its cultural values for the benefit of all participants.

On Saturday 26th and Sunday 27th September 2020, on the occasion of the European Heritage Days sponsored every year by the Council of Europe and supported by the Italian Ministry of Heritage, Culture and Tourism (MiBACT), Co-Rome together with the co-district community managing organizations, as for CooperACTiva and the Community for the Public Park of Centocelle (CPPC), organized two days of itinerant walks in the co-district Rome South-East, joining the initiative of the European Heritage Days 2020. The initiative has been supported by LUISS-LabGov.City, OpenHeritage.eu, Fusolab 2.0 and the non-profit organizations “Hermes”, and it is part of the Horizon 2020 “OpenHeritage” project activites.

The “Cyclo-pedestrian itineraries in the Agro Romano at the origins of the Pratone di Torre Spaccata and the Archaeological Park of Centocelle” two-days route will offer to the participants the possibility to get to know new places and to discover the cultural heritage of the South-Eastern Rome co-district. The route stages will lead to the discovery of the ancient Agro Pontino path, among abandoned farmhouses, prairies rich in historical vestiges and archaeological heritage mostly still unknown, crossing parks and green corners manned by active citizens.

The first free guided tour will begin on September 26th at 10 a.m., starting from via Giuseppe Micheli and will take participants to the discovery of the Pratone di Torre Spaccata, the Sisenna-Romanisti Park, the Tower of San Giovanni, up to the Pratone and Parchetto della Cultura in via Rugantino where it will end at 12:30 p.m.

For the day of September 27th, the second free guided tour will take visitors to admire beautiful sunsets from the Park of Centocelle, during a cultural and educational walk full of historical and archaeological cues in order to spread the history and cultural heritage preserved by Park. The appointment is at 5 p.m. in via Casilina, 712 (in the parking area, near the fountain). The day will then end in a gathering of the participants at the Fusolab 2.0., giving them the chance to attend a free musical event during the evening and provided by the kermesse “Effimera”.

On both days there will be the chance to rent bikes to move from one place to another throughout the route.

However, due to unstable weather conditions or to safety reasons, the calendar of events and the possibility of renting a bike for the tours may be affected.

To participate in the initiatives on a single or both days each participant must complete a registration form provided at the following link https://form.jotform.com/202602840587051.

The use of face mask is required by all participants.

For any other information on itineraries and the cultural-educational project organized by Co-Roma and its partners, please refer to the dedicated sections on the MiBACT website https://www.beniculturali.it/evento/itinerari-ciclopedonali-nellagro-romano-alle-origini-del-pratone-di-torre-spaccata-e-del-parco-archeologico-di-centocelle, as well as on the Council of Europe – Venice Office website https://www.coe.int/it/web/venice/lazio2.