During the last decade, Community Land Trust has been welcomed in many European countries by grassroots movements and policy makers alike as a valuable response to the increasing difficulties that a large portion of the population encountered to get access to decent and affordable housing. When trying to enter the housing market, people often face two obstacles. First, expensive private rent and even more high-priced individual private ownership have become out of reach for those who lack the financial power to afford it; secondly, the supply and quality of social housing has proven unable to meet the demand of a growing number of low-income people who seek access to it[1]. In spite of the lack of a long-term stable framework for the affordable housing sector in Europe,[2] a whole range of piece-meal solutions aimed at increasing the supply of affordable housing have been put in place through both public policy interventions at a State and regional level, and the activism of not-for-profit housing cooperatives, housing associations, and self-organized groups of people. 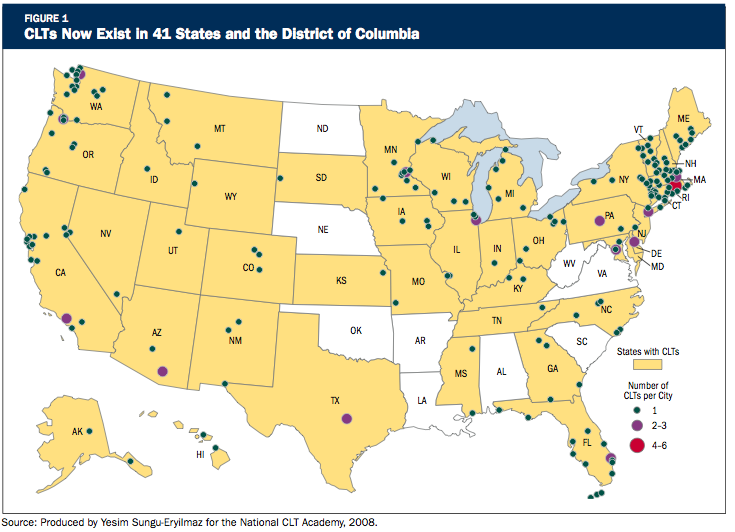 Especially concerned with the long-term affordability of housing for low- or moderate-income people, Community Land Trust has gained ascendancy among those solutions that are capable of responding to the pitfalls of the housing market and has consequently known an unprecedented spread throughout Europe during the last decade. Community Land Trust (also known by its acronym CLT) is a land ownership scheme capable of fostering housing long-term affordability while at the same time allowing the broad participation of the community involved[3]. Community Land Trust arrived on the scene in the United States in the late 1960s as an outgrowth of the Southern Civil Rights Movement and was originally used as a mechanism for African-American farmers to gain access to agricultural land[4]. Since then, CLT has steadily grown in importance across the United States, so far as it has been employed in urban and rural areas as a means to provide an alternative to low- and moderate- income people for affordable housing and neighborhood revitalization[5]. According to the National Community Land Trust Network (NCLTN), which represents the major association for CLTs in the United States[6], there were in 2011 “a total of 246 CLTs in the network with coverage in 45 states and probably about 6,000 homes in the land trusts’ hands across the country”[7].

Community Land Trust is a membership-based, non-profit organization chartered to hold and manage land in trust for the benefit of a given community. These three main elements – land, trust and community – are the core of the CLT model. As to the first element, land is held in trust by the CLT for the benefit of the community. Actually, the CLT acquires land through purchase or donation with an intention to retain title in perpetuity and to remove the land from the speculative market[8]. While permanently retaining title to the land, the CLT enters into long-term agreements with prospective low- or moderate-income residents, which are thus given ownership of buildings and improvements on the land. The result is a split between the ownership of land and improvements. As to the element of trust, stewardship or “trusteeship”[9] of the land for the long term is ensured by the CLT in different ways. Firstly, the ground lease set out a range of mutually agreed restrictions between the CLT and residents, such as resale-price, buyer-eligibility, occupancy, and use restrictions, which ensure that homes remain affordable for future buyers over time. Secondly, the CLT does not disappear once homes are eventually sold by leaseholders; on the contrary, CLT may retain an option to repurchase the buildings located on the land when residents wish to sell them and, in the event a resident defaults on her mortgage, the CLT may have a right to step in to prevent foreclosure[10]. As to the third element – community – the democratic governance structure of the CLT reflects the idea that CLT operates within a given community (a single neighborhood or an entire city) and that all members of the community should have a degree of control over the way the land is managed. First of all, membership of the CLT is open to anyone living within the boundaries of the community and not only to residents, each group having the responsibility of electing one third of the governing body. Moreover, the board of trustees – normally called Board of Directors – is tripartite and includes representatives of (i) residents of the trust-owned land, (ii) members of the community who do not lease land from the CLT, and (iii) other people who are meant to represent the public interest, such as public officials and non-profit organizations and funders.

The CLT model, including all the features described above, has been given legal recognition into the federal Housing and Community Development Act of 1992, where it is defined as

(1) that is not sponsored by a for-profit organization;

(2) that is established to carry out the activities under paragraph (3);

(A) acquires parcels of land, held in perpetuity, primarily for conveyance under long-term ground leases;

(B) transfers ownership of any structural improvements located on such leased parcels to the lessees; and

(C) retains a preemptive option to purchase any such structural improvement at a price determined by formula that is designed to ensure that the improvement remains affordable to low- and moderate-income families in perpetuity;

(4) whose corporate membership is open to any adult resident of a particular geographic area specified in the bylaws of the organization; and

(5) whose board of directors:

(A) includes a majority of members who are elected by the corporate membership; and

(B) is composed of equal numbers of

(ii) corporate members who are not lessee, and

(iii) any other category of persons described in the bylaws of the organization”[11].

Since then, CLTs have steadily spread throughout the United States. The expansion of the CLT movement has been pushed by different factors. First, non-profit organizations have committed themselves to help groups to identify and reclaim vacant land and turning it into a community resource, as is the case for 596 Acres. Secondly, CLT has been increasingly welcomed by local administrations as a valuable response to the shortfalls of the public housing market. An example of this is the Request for Expressions of Interest (RFEI) recently issued by the New York City Department of Housing Preservation and Development (HPD), whose objective is to identify qualified groups who are interested in forming a CLT[12]. The formal recognition of CLT by legislation, the growth of a national CLT network, along with the increased attention of public authorities, have also favored the diffusion of the CLT model outside the United States. Along these lines, both groups and local authorities in several European countries have attempted to adapt the CLT model to national contexts and promote its use, being attracted by its ability to preserve long-term housing affordability while triggering neighborhood revitalization, both of which are much-needed in large European urban centers.

[1] For a thorough analysis of the situation of the housing market and related policy development in each of the European member States, see The State of Housing in the EU 2015, Housing Europe, the European Federation for Public, Cooperative and Social Housing Brussels, available for download at http://www.housingeurope.eu/resource-468/the-state-of-housing-in-the-eu-2015 (last accessed on December 26th, 2016).

[3] Its first advocates described CLT as “a social mechanism which has as its purpose the resolution of the fundamental questions of allocation, continuity and exchange”: The Community Land Trust. A guide to a New Model of Land Tenure in America, International Independence Institute, Center for Community Economic Development, 1972 (reprint 2007). In the book, the basic structure of CLT is also carefully explained.

[5] According to Abramovitz, the reasons for the increased emphasis on affordability in the US are to be linked to “the massive number of low- and moderate-income rental units built under various subsidy programs in the late 1960s and early 1970s that have been in danger of being lost as affordable housing through mortgage prepayment. […] In addition, the rapid housing price inflation experienced in many parts of the country during the 1980s further strained the ability of the private housing market to sustain an adequate supply of affordable units”: D. M. Abramowitz, Community Land Trusts and Ground Leases, in 1 J. Affordable Hous. & Cmty. Dev. L. 5 1991-1992, p. 5.

[6] Information about the CLT network in the United States are available at http://cltnetwork.org

[10] For details concerning the functioning of CLT, see the CLT Technical Manual, available at http://cltnetwork.org/2011-clt-technical-manual/.

This article is drawn from a broader research conducted in the framework of the ERC-funded project “INCLUSIVE” (2014-2019) led by Professor Séverine Dusollier and hosted by the Sciences Po Law School, Paris