Rethinking the Urban Territory as a Learning Space

Recreating the urban territory as a commons means reconsidering the way citizens absorb and engender all the elements that can support human development – including learning, as a broader way to refer to education. Urban territories can offer unique learning opportunities on different levels, an important one being that of stimulating people to recognise themselves as citizens and as part of a community, or different communities (from the street, to the neighbourhood, to the city layer). Moreover, the experiencing of the urban territory exposes people to social diversity, which is crucial to cultivate empathy and tolerance, much needed qualities especially in present times.

The understanding of the city as a fertile learning environment presents itself as an invitation to consider what children can learn in the urban territory that cannot be taught at school, and what are the urban qualities that can be cultivated to create social connection and empowerment. Initiatives, worldwide, that explore this invitation are growing in power and number. One of them, TaMaLaCá1 (Tutta Mia La Città, meaning, All The City is Mine, a collective of woman based in Sardinia, Italy) has been working in collaboration with primary schools to instigate children in the creative occupation of the urban environment. TaMaLaCa’s projects reverse the situation that life on the street has been replaced by cars on the streets, and that many cities are not placing an invitation for children to play in the outdoor urban environment as they used to in old times. 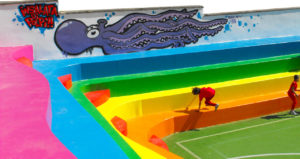 Another approach to the city as a learning environment is the concept of Bairro-Escola (meaning Neighbouhood-School, in Portuguese), an alternative education model prototyped by Cidade Escola Aprendiz2, a Brazilian NGO that advocates for integrated learning opportunities for communities. Bairro-Escola is a model of networked learning that articulates different stakeholders such as communities, community organisations, local schools, private institutions, and the public sector, aiming at an integrated development of people and territory based on learning opportunities that exceed the formal school curriculum, and a set territory to expand the notion of learning. It aims at developing richer community relationships and integrated human beings that express different kinds of intelligence (including cognitive, social, physical, affective, and psychological abilities), capacitating students to become active in society through personal and collective autonomy.

Bairro-Escola place schools as a reference point for articulating public policies, community resources and, mainly, community knowledge, being much attentive to local identity and its richness in relationship to human integrity. Schools, thus, become responsible for the articulation of democratic political-pedagogic projects, always committed with collective decision-making processes involving different stakeholders for managing the school itself and its wider community. In this process, students are apt to see themselves as part of networked-systems and to trust their ability to influence the development of their communities, and their cities, also understanding their role and power within a wider network of people.

How can cities be redesigned in such a way that, as emphasised by these two case studies, stimulates learning processes in the urban environment that allow children to grow into citizens that understand they are part of networked systems, thus becoming active citizens?

Italian pedagogist Francesco Tonnucci3 reinforces the idea that it is crucial to stimulate children’s participation in the urban if we are to have cities that, instead of disconnection, stimulate stronger ties and more resilient systems. That said, to recreate cities where children’s experiences are valued is an idea worth expanding both through design, learning curriculums, and policy development – after all, the children of today represent the active societies of tomorrow.