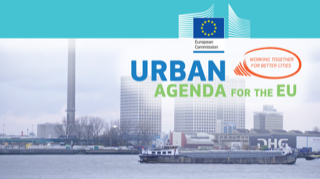 The urban agenda for the EU: how cities got a seat at the table of policy-making

In the last thirty years the European Union understood that Member States cannot be left alone in planning urbanization and implement policies addressing urban areas. Over the years, the European Union managed to enact policies concerning cities, even in absence of an explicit legal basis, since the launch of Urban Pilot Projects and the URBAN initiative in the 1990s.

Both the European Commission, through the DG REGIO and the DG ENV, and the Council of EU implemented policies and issued declarations to enforce the European Urban Dimension. Cohesion policy, the main European policy aimed at reducing disparities among European regions, represented the main driver for policies related to urban areas. In 2007, the Treaty of Lisbon introduced the objective of territorial cohesion which formalized an implicit EU involvement in urban matters. The Urban Agenda for the EU represented the last step in this long process.

On 30 May 2016 an informal meeting of EU Ministers with responsibility for urban affairs took place in Amsterdam, at the initiative of the Dutch Presidency. During this meeting, the “Urban Agenda for the EU”, also called “Pact of Amsterdam”, was adopted.

The Urban Agenda is an integrated and coordinated approach to deal with the urban dimension of the EU. By focusing on concrete priority themes through dedicated Partnerships, the Urban Agenda seeks to improve the quality of life in urban areas. Based on the principles of subsidiarity and proportionality, it focuses on the three key pillars of EU policy-making: better regulation, better funding and better knowledge.

However, the Agenda has not established an explicit European urban competence. Conversely, it managed to promote a European model of urban development, to create a supranational coordination mechanism for urban policies, to empower cities at the EU level and strengthen Member States commitment towards urban policy-making at the national level.

The Pact of Amsterdam provided valuable support and impetus to urban policy-thinking and dialogue in Europe. Moreover, since European legislation is widely implemented in urban areas, the Urban Agenda for the EU resulted necessary to replace fragmented experiences with an integrated approach to cross-sectorial policies. The integrated approach is linked with the consideration that policies affecting urban areas must be complementary across different government tiers. Thus, all levels of government must be involved in this process of policy-making by ensuring coordination between policy-sectors, in full respect of the subsidiarity principle. As the Report from the Commission to the Council on the Urban Agenda for the EU pointed out in 2017, the democratic deficit that the European Union is facing nowadays, may be addressed by reframing the governance model and offering a seat to cities at the table of policy-making. As cities represent the closest governance level to citizens, working with them can bring the EU closer to people’s needs, by delivering visible improvements to their daily lives.[1]

In June 2019 the European Commission published the report “Urban Agenda for the EU, multilevel governance in action”[2] to assess the impact of the Agenda on cities and, most notably, on European policy attitudes towards urban development. The partnership mechanism resulted the most innovative tool provided by the Agenda. Though the Pact of Amsterdam has not ultimately introduced an explicit European urban competence, it managed to build a connection for cities to the European policy framework through partnerships. Therefore, the European Commission is carrying out impact assessments including a territorial assessment to better understand how future EU legislation will impact territorial units such as cities. It also set a platform called REFIT to improve existing EU legislation involving national authorities and other stakeholders, considering the need to increase involvement from local and regional authorities.

Three years after the Pact was adopted, Member States, cities, the European Commission and other relevant stakeholders decided to create two new partnerships: Security in public spaces and Cultural heritage, given their well-known relevance in the urban development context. At the moment, the European Commission reported that a total of 114 actions included in the partnerships’ action plans have been proposed with 11 finalized, 21 planned and 82 under implementation.

Moreover, during Romanian Presidency of the Council, the Urban Agenda for the EU has been reinforced by the Bucharest Declaration, which will serve as a bridge between the Urban Agenda, the EU Territorial Agenda and the renewed Leipzig Charter 2020. In fact, the incoming German Presidency announced that it will revise the 2007 Leipzig Charter on Sustainable European Cities to redefine the principles of sustainable urban development. Indeed, the experience of the partnerships based on multi-level urban governance, co-creation of policies and citizen participation influenced the decision to renew the Leipzig Charter by the second half of 2020.

More interestingly, some Member States have been inspired by the Urban Agenda for the EU and applied similar approaches at the national or regional level. Italy, which traditionally has never implemented a National urban policy, shows the highest number of cities involved in the Urban Agenda for the EU. Additionally, the Italian Agency for Territorial Cohesion works with large and small cities to jointly implementing this initiative.

The European Commission’s legislative proposal for the future Cohesion Policy also provides support to the Urban Agenda, within the framework of the European Urban Initiative which encourages cities to innovate, access knowledge, understand policy, support networking and capacity building. In fact, Cohesion Policy beyond 2020 will continue to sustain integrated territorial and local development strategies through various tools and will empower urban authorities and territorial bodies in the management of the funds, while requiring strong local partnerships with relevant stakeholders. The urban dimension of Cohesion Policy will be strengthened, with 6% of the European Regional Development Fund dedicated to sustainable urban development strategies.

It would also be interesting to observe how the new EU Commission executive, which is due to take office on 1st November 2019, will contribute to the European urban dimension. In fact, the current European Commissioner for Regional policy, Corina Creţu, has decided to resign in order to take up a seat in the European Parliament. The new European Commissioner leading the Cohesion and Reforms portfolio will be the Portuguese Elisa Ferreira, currently Vice-Governor of Banco de Portugal. She has been a Member of the European Parliament for many years and she was Minister for Planning and Environment in Portugal.[3]

[1]EUROPEAN COMMISSION (2017), Report from the Commission to the Council on the Urban Agenda for the EU, available online at: http://ec.europa.eu/regional_policy/sources/policy/themes/urban/report_urban_agenda2 017_en.pdf  , p.3.

[3]EUROPEAN COMMISSION (2019), The von der Leyen Commission: for a Union that strives for more, available online at: https://ec.europa.eu/commission/presscorner/detail/en/ip_19_5542

The 3rd meeting of the City Science Initiative (CSI)﻿

The City Science Initiative aims to strengthen the ways in which science and research can help address the urban challenges and to develop a structured approach to evidence-informed policy-making at cities’ level. The third meeting will gather representatives from cities like Paris, Hamburg, Cluj and Warsaw in Brussels. Below is a brief description of the program.

After greetings from Deputy Director-General Charlina Vitcheva (JRC) and Deputy Director-General Patrick Child (DG R&I), the session will start at 12.30pm with an introduction to the work programme and deliverables for 2019-2020 for the City Science Initiative by Caroline Nevejan. It will proceed with a presentation of the 5 city challenges, with a first part from Lead Cities and the presentation of the Knowledge dossier by the European Commission, concluding with a part dedicated to questions and discussion for each challenge.

At 3.30pm, after a short break, cities and networks’ representatives as well as actors will be invited to join groups accordingly to the challenge they are most interested in, and will discuss the methodology to adopt in facing this challenge. A plenary discussion will come next, based on the methodological ideas and recommendation emerged from the group sessions. The plenary discussion will also be the occasion for addressing the next steps of the City Science Initiative (CSI) and in particular the tools to activate better cooperation with cities willing to join the network. A presentation of the CSI’s website will eventually be set up.

In the evening, from 7pm to 9pm, R&I will provide for a presentation of Horizon Europe and Charles Landry will present the output of the High-Level Expert Group on Innovating Cities which will then lead to a discussion moderated by Jean François Aguinaga, Head of Unit ‘Future Urban Mobility Systems’, DG R&I. 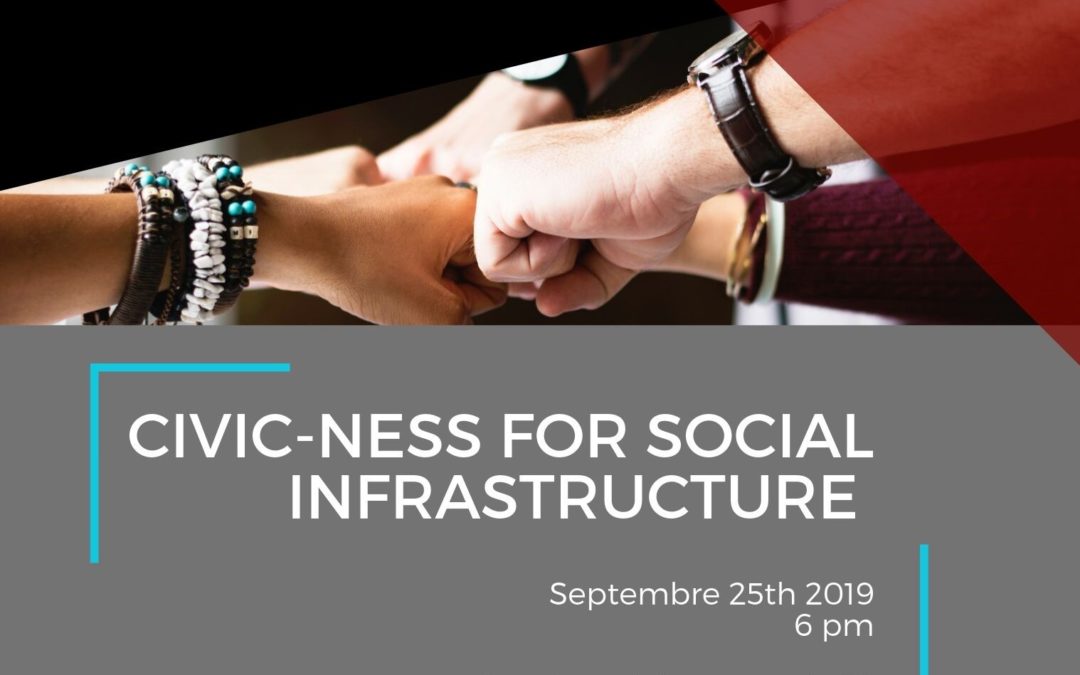 Luiss University will host the event “Civic-ness for social infrastructure” on September 25th 2019. The conference will take place in the LOFT located in the Luiss campus, Romania 32 and will start at 6pm.

Fondazione Italia Sociale and Luiss University have indeed started a dialogic process called “Civic-ness” aimed at identifying the cornerstones of a design collaboration to develop theoretical and empirical knowledge through didactic initiatives and applied research on the theme of civicness.

The latter is understood as a mentality oriented towards civic responsibility, sustainability for the production of civic value, legality and merit, implementation of the 2030 Agenda and the Sustainable Development Goals.

“Civic-ness” therefore aims to generate and spread a civic mindness to make the concept of civic responsibility the common heritage of the future ruling classes, also with the objective of updating or overcoming the concept of the so-called third sector and offer a response to the civic spread.

Introduction to the work

Edoardo Reviglio, Head of International and European Projects of the Cassa Depositi e Prestiti and member of the High Level Task Force on Social Infrastructure “The role of investment in social infrastructure”

Federico Merola, CEO Arpinge SpA and member of the ASTRID Foundation Board