In 2013, at the age of 31, Aja Brown (born Aja Lena Clinkscale) made history when she was elected as the youngest mayor in the history of the City of Compton. She immediately set to work on her ambitious New Vision for Compton revitalization strategy, seeking to paint a new picture of the city that has become notorious for gang violence and crime.

In the late 1980s Compton’s violent reputation reached national audiences when the failed ‘War on Drugs’ met the rise of local gangsta rap. Groups such as Compton’s Most Wanted and N.W.A. which made the city famous with their iconic album Straight Outta Compton. The mainstream media leaned into this identity, and the city became known for the turf war between the Bloods and Crips.

In 1992 when four officers in the Los Angeles Police Department were acquitted after a recording of their use of excessive force in the arrest of Rodney King was widely viewed across the country, riots broke out throughout Los Angeles and Compton. Exacerbated by the memory of the murder of Black ninth-grader Latasha Harlins by Korean shopkeeper Soon Ja Du, the riots disproportionately affected LA’s Koreatown and when they were over 63 people had been killed and over 12,000 had been arrested, while the reputation of Compton was solidified as a place of unrest and violence.

Though crime ebbed and flowed in Compton throughout the 1990s and early 2000s, when Aja Brown took office in 2013 she inherited a city with an infamous reputation, the violence of which was immortalized in albums, books, articles, and movies; as well as a $43 million deficit, an unemployment rate triple the national average, a school district with only a 57% graduation rate, and a spiking murder rate (with 2005 the deadliest year in recorded history).

Focused on 12-key principles centered on quality of life, economic development, and infrastructural growth; Aja Brown’s 2013 New Vision for Compton, was the jumping off point for her mission to rehabilitate her city. Through policy reform and strategic partnerships she has championed several initiatives to reduce crime, eliminate human trafficking, and put a stop to gang violence.

Notably, in 2014, Mayor Brown met with 75 local gang leaders and members to discuss how they could work together to create a more peaceful Compton. This meeting, in tandem with President Obama’s My Brother’s Keeper, led to the launch of Compton Empowered a gang reduction intervention composed of numerous ex-gang members and fixtures of the community. Originally, the group met every other Sunday to coordinate cease-fires, resulting in a decrease in homicides of nearly 50% in the first six months of the programme. Now the group has taken on new life as the Compton city council implemented an official City Gang Intervention & Prevention Program, employing 13 ex-gang members that manage neighborhood peace treaties, create new opportunities for employment, and recruit at-risk youth to participate in healthy extracurricular activities. As a result of Mayor Brown’s holistic gang intervention policy and her community’s hard work, Compton has achieved record low homicides (a 64% reduction) without diverting any additional funding to law enforcement or policing.

Mayor Brown’s community-oriented leadership also extends to growing the economy as evidenced by her First Source Hiring Agreement – mandating 35% local hiring for city funded projects. These efforts have also reduced Compton’s unemployment rate by half – shrinking the 18% rate when she took office in July 2013, down to 9% by December 2015.

Overwhelmingly re-elected to a second four-year term in June, 2017; Aja Brown continues to move forward with plans to elevate and empower her city, launching a $70 million five-year infrastructure program in 2019. Awarded the John F Kennedy New Frontier Award in 2016, Mayor Aja Brown served on the California State Delta Stewardship Council prior to being elected. A champion for youth, women’s rights, and socio-economic equality; she holds a Bachelor’s degree in Public Policy, Urban Planning, and Development as well as a Master’s degree in Urban Planning with a focus on Economic Development. Her partnership with Girls Fly! continues to empower girls and young women by introducing participants to career opportunities in science, technology, arts, math, and engineering.

Read about more influential women in urbanism and architecture at Not Just Jane Jacobs. 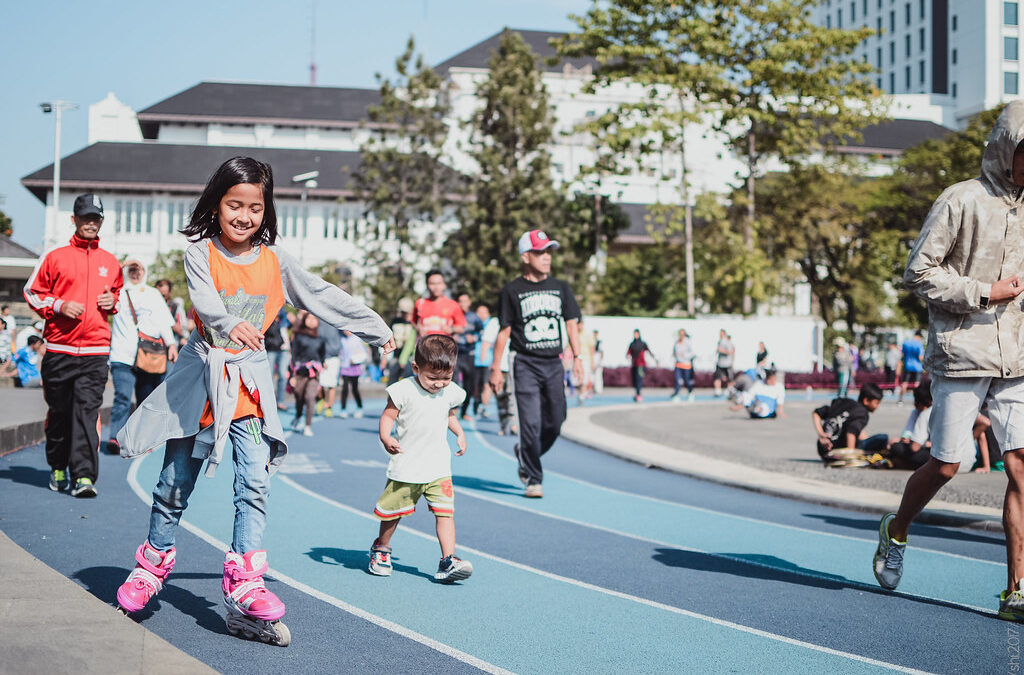 “I’m not white, wearing black, funky glasses, tall or male. I’m none of the preconceptions of what an architect might be, and that means that every time I introduce myself as an architect, I have to push through the initial assumptions.” Yen Ha, founding principal of the New York architecture firm Front Studio explained in a recent interview with the NYTimes. Representation matters, and in an industry with so few visible women at the top, Marian Wright Edelman’s assertion that “you cannot be what you cannot see” could easily be the rallying cry for women in architecture and urbanism.

Despite a general global trend toward educational equity of the sexes in university architecture programs – a prevailing disparity is revealed when observing women in the workforce. Even though graduating classes are close to gender parity, in Canada only about 29% of practicing architects are female – and the numbers only get lower elsewhere. The share of practicing female architects is about 26% in the United Kingdom, 24% in the United States, 21% in South Africa, and less than 20% in Australia. Similar polling is taking place for the first time in the Middle East, where Suad Amiry, founder of the Riwaq Centre for Architectural Conservation, explains, “I taught architecture in Jordan and at Birzeit University in Palestine and I would say 60 to 70 percent were women, but when we go into the real world and begin to work, all of a sudden, we disappear…”

Unfortunately, the proportion of women visible in the architecture industry only gets more dismal when delving deeper into the management hierarchies of the world’s largest architectural firms. Dezeen’s 2017 study of the 100 biggest architecture firms in the world, found only three headed by women (Scandinavia’s Henning Larsen, Tengbom, and White Arkitektur), and only two that had management teams that were comprised of over 50% women (Tengbom and White Arkitektur). While just 1 in 10 of the top-level roles at the 100 biggest international firms are female, architect Dorte Mandrup, who runs her own studio in Denmark, responded to the findings: “It’s interesting too that there seem to be practically no woman holding creative director or lead designer positions…The women that are at top positions have administrative or CEO roles backing up a male star.” Thus, of the already small proportion of women practicing architecture professionally, only a handful of these women make it to the top, comprising only 18% of the top three tiers of management at the world’s 100 largest firms.

Though the numbers are harder to track – urbanism and urban planning too appear to have a gender parity crisis. Planetizen’s “Top 20 Urban Planning Books (Of All Time)” contains only three female authors out of the total twenty (Jane Jacobs’ The Death and Life of Great American Cities, Rachel Carson’s Silent Spring, and A Pattern Language: Towns, Buildings, Construction co-authored by Christopher Alexander, Sara Ishikawa, and Murray Silverstein). Additionally, the 2016 edition of the Routledge City Reader includes articles by 66 contributors, only 4 of which are women (6%). Meanwhile, Routledge’s 2016 Planning Sustainable Cities and Regions, contained 11 female contributors out of the total 52 authors (21%), better but still nowhere near equal representation.

Urban governance obviously plays an undeniable role in how cities are structured and serve their residents. While globally women are increasingly able to secure positions of authority, their representation in mayoral offices is still nowhere near equal to that of men. A survey of the fifty most populous cities in the world (according to data provided by the United Nations) shows that only ten of these cities are run by women, while forty men hold the mayoral (or similar) titles.

These numbers are particularly frustrating in that, when women have contributed to architecture and urbanism, their achievements have historically been miscredited or discarded. From about 3500 years ago when Egyptian ruler, Hatshepsut, had her name and buildings struck out of history by her successor – to 1991, when Robert Venturi alone was awarded the Pritzker Prize for his and Denise Scott Brown’s joint work– women’s achievements have been concealed or solely attributed to the men in their lives.
The small proportion of women in the field and the erasure of their achievements paint revisionist histories of our cities, leading us to believe that women have only been active creators and influencers since the late 20th century. Women in the industry who have been able to overcome such obstacles are few and far between, creating a tokenism that makes finding role models difficult, and fosters the belief that in order to succeed one must be the exception. The disappointing absence of women in architecture studios, boardrooms, global summits, scholarly readers, syllabi, and classrooms led to the creation of Not Just Jane Jacobs – an ever-growing catalog of brief but scholarly biographies of the women who shape our cities. With a dual mission Not Just Jane Jacobs hopes to acknowledge women whose work was historically erased while also illuminating the numerous and diverse women who are currently contributing to the urban fabric.

In collaboration with the Urban Media Lab, Not Just Jane Jacobs seeks to act as a resource for women who may be looking for role models who look a bit more like them. Throughout this collaborative series we will be showcasing influential women who have had a profound impact on their urban surroundings through biographies, histories, and hopefully even an interview or two; seeking answers to the questions: What does it mean to have a male-dominated city in urbanism, architecture, and design? How can we design more inclusive cities? And who might already be doing it?

If you know of someone that you believe should be showcased, feel free to reach out directly, here.