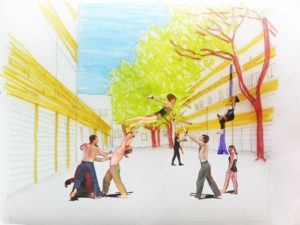 The striking amount of underused public spaces in cities worldwide shows the extent to which the value of public space is underestimated. On the other extreme, a variety of public spaces are gradually being privatised and thus public life, to some extent, threatened. Amidst these two opposite trends, underuse and privatisation, public space and public life are now found in a delicate and marginal situation in cities.

Despite a lack of attention to how public spaces are being tackled, it is possible to see their potential to be transformed into a resource for community development in what is recognised as grassroot initiatives. Grassroot initiatives are based on citizens getting together and taking action to address issues affecting their communities that are left unresolved by municipalities. They usually take place in underused public spaces and thus show an alternative destiny to the overlooked public spaces in cities. Examples include R-Urban, in Colombes, France (http://r-urban.net/en/), a resilient network of projects embracing development of housing, economy, culture and urban agriculture, and other projects such as Cantiere Barca, in Turin, Italy (http://www.publicspace.org/en/works/h109-cantiere-barca), where public space, social dynamics and community facilities have been regenerated collectively with objects made on local carpentry workshops. Another example is Build a Better Block, USA (http://betterblock.org/), intended to stimulate communities to get together to regenerate the public spaces of the area where they live, usually by using tactical interventions (http://islandpress.org/book/tactical-urbanism).

Grassroot initiatives can be compared to the urban commons because they rely on collective management of public space supported by collective action. Through a personal research analysing the structure of different grassroot initiatives, I have concluded that grassroot initiatives and the urban commons are usually composed of four underlying elements: repurposed public spaces, collective governance, hands-on action, and resulting benefits that support community and urban development (http://www.academia.edu/33751886/Repurposing_Underused_Public_Spaces_into_Urban_Commons_An_active_participatory_urban_regeneration_model_for_Gospel_Oak). Benefits of the urban commons emerge from the action of collectively repurposing underused public spaces as a resource for community development, and result in social, economic and environmental benefits.

The urban commons indicate an open and spontaneous, but structured, collective appropriation and repurposing of public space. Still, the structuring of collaborative governance and community engagement is a big challenge and a project in itself, requiring time and adaptability. Moreover, there is no formula for community engagement and collaborative action and governance, since every community and its associated development targets widely vary.

The urban commons is not only about sharing “the products of commoning” but also about shaping citizens as “subjects of sharing…who accept their incompleteness, subjects who accept that they can be transformed through sharing and subjects who recognize in sharing the power of opening to potential worlds, the power of encountering ever-new horizons of commoning…Collective subjects are thus being formed and transformed without everybody being reduced to fit perpetuated role taxonomies (…) ”. 1(Stavrides, S. 2016 – p.273)

Thus, as emphasized, the structure of the urban commons is ever fluid and collectively adaptable. Urban commons’ structural responsiveness supports and is supported by individuals contributing to shaping the commoning group and its collective aims while being shaped back. This responsiveness and openness is a characteristic that cannot be grasped entirely due to the uniqueness of every urban commons.

Moreover, the urban commons can inform collaborative development both at the local (community) and city scale (policy making), since the activities nurtured within it are imbued with an awareness of the city as networked spaces, people and resources that mutually impact each other. Thus, the urban commons can support active community empowerment and tackle issues on different levels – from the community to city scale, from the individual to the collective, and from social to spatial. The ability of the urban commons to address urban issues thoroughly is due to its spatial structural element (public space) and social structural elements (collective governance, hands-on activities, and emerging benefits) and hence commoning processes can tackle space while restoring social cohesion.

Because cities are getting more complex to control through centralized planning models the urban commons gradually gains more strength to develop since it relies on the sharing of power through collective governance and planning frameworks based on shared responsibility between government and citizens. The urban commons development model implies in alternative service provision where citizens have an active responsibility in shaping a wide array of services such as water management, health provision, food production, social economy, etc. Communities thus adapt from being purely consumers to becoming consumers and producers.

Nonetheless, on emerging collaborative planning models, the interface between government and citizens on the sharing of power is still very unclear. Both “appear stuck, asking each other to do more and more to fill the growing gaps between service provision.“2 (Britton,T., 2015 – p.22) Regarding citizens, “what is expected of him or her in ‘the new model’: a role as a volunteer, or as an employee, or employer in…say, a cooperative? Does the burden of caring for those dependent on care also lie with ‘active’ citizens – with a job – or only with ‘available’ citizens – without a job? Furthermore, there is confusion about the type of service and production that would qualify for the new model.”3 (Moore, T., 2013 – p.25)

That said, awareness of responsibilities, capabilities and limitations regarding each party involved in the collaborative planning process is crucial to advance the discussion and practice of collaborative urban development.

The urban commons development model adopted on a city scale would imply in government’s support for communities to co-produce goods and services on public spaces, which would directly impact on the supply chain system and enhance holistic sustainability – social, economic, and environmental. Governmental support for the common use of public space would drive a new public life and provision model, alternative to the “unsustainable model in which all necessities of urban survival are distanced from consumers by markets, corporations and public bodies.”4 (Bingham-Hall, J., Kaasa, A., 2016 – p.3)

Despite its benefits, adoption of the urban commons development model on the community and city scale has its challenges, the most critical being: lack of clarity on the interface between government and citizens on collaborative planning models; lack of clarity on how to structure community engagement; provision of legal frameworks for citizens to appropriate public space through alternative uses; and clarification of the urban commons structure.

LabGov is playing an important role in addressing these challenges.