The observation and analysis of more than 400 policies and projects enabling co-creation, co- production, and co-governance of urban assets and services in more than 130 cities (www.commoning.city) led us to identify five design principles and a legal and financial toolbox to create partnerships between the urban commons and the public, private, knowledge, social sectors (the so-called quintuple helix). These examples include institutional commons-based arrangements from the scale of the individual resource to the entire city as the resource, and consequently the policies and platforms that enable those experiments become more complex. All in all, our observations and study of the examples show that there are emerging new ways of innovating and supporting new ways to co-create, co-produce and co-manage urban shared resources at various scales.

However, the process used to arrive at some of these experiments and ways that they can be replicated within a particular local context differ greatly. Based on our experiences working in Italian cities and observing work carried out in other cities developing experiments through similar approaches and policies, we codified a project/policy cycle by which interested cities or single actors can collectively undertake to experiment a commons-based approach to face any urban challenge and to apply it to a range of urban assets and services. We call this the Co-City Cycle. 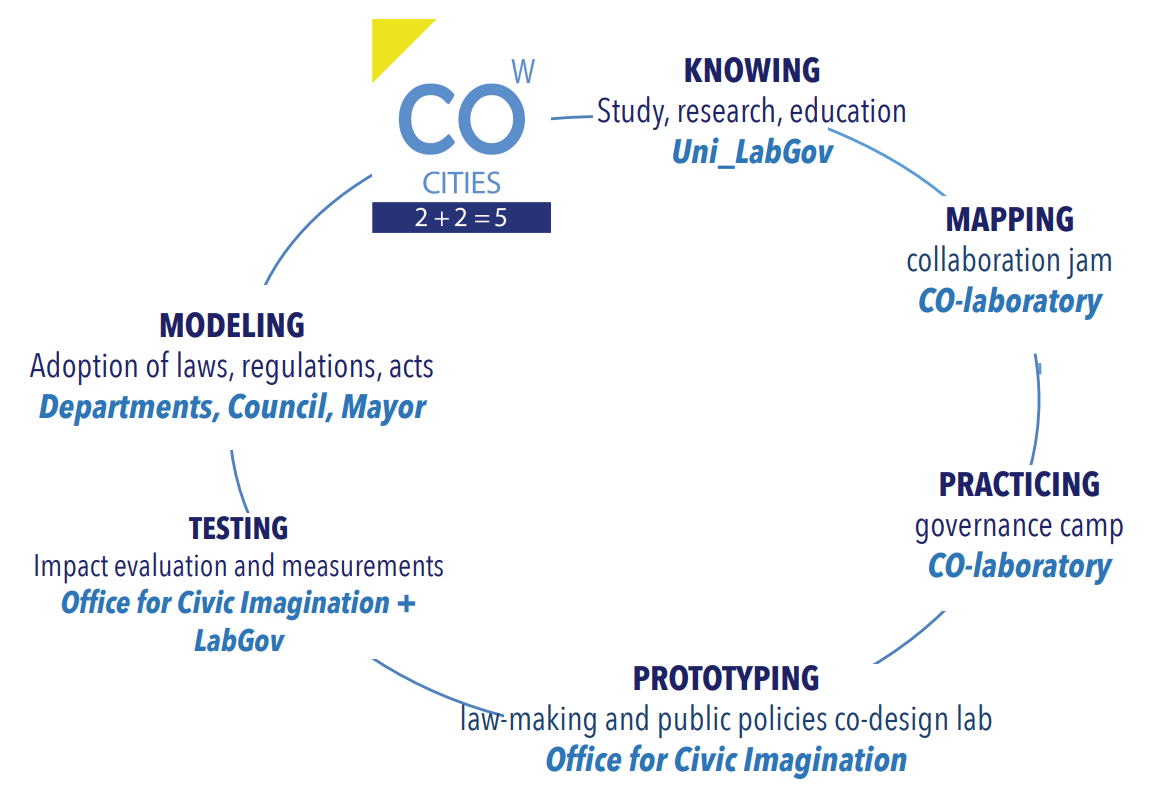 The first phase of the protocol, knowing, is aimed at fostering through cheap talking the identification of potential urban commons and the emerging of an active community through dialogues with key interlocutors in the city (scholars, activists, experts, practitioners). Findings on cheap talk in the study of the commons (Ostrom 2009; Poteete et al. 2010) show that it favors cooperation. The act of listening and acquiring knowledge from local actors through face-to-face, informal and pressures-free communication activity is the key activity of this phase. In the Co-City cycle, the cheap talking is realized through discussions and co-working sessions organized in informal settings with experts, key testimonials of NGOs or social enterprises, activists and practitioners active in the city for the urban commons, experts and scholars of relevant areas (urban planning, service design, communication, economic sustainability, governance). The output is the identification of existing or potential urban commons and communities active in the city to realize an overview/picture of the existing practices and start stressing the attention on specific urban areas that could be potentially object of the experimentation.

Next is the mapping/calling phase which develops in a twofold direction: analogic (or offline) and digital (online or e-mapping). The main tools of this phase include fieldwork activities in the relevant area from which information gleaned in the cheap talking phase is employed to begin to map potential urban commons. Starting from them, the mapping process goes deeply in order to understand the characteristics of the urban context in order to design and prototype appropriate governance tools later on in the process and to select an area of experimentation. This phase might also include the use of tools developed in previous applied and experimental research on the urban commons, such as ethnographic work, as well as active field observation and exploratory interviews or surveys. It can also include the creation of a collaborative digital platform as a tool for disseminating information and engaging the community. The mapping phase provides a visualization of urban commons through relevant civic initiatives and self-organization experiences and the output is the identification of the most appropriate areas where to conduct the experimentation.

The third phase, the practicing phase, is experimental in nature. At the heart of this phase there is a “collaboration camp” where synergies are created between emerging commons projects and local authorities. Collaborative actors are identified from various sectors from the quintuple helix who are willing to participate in co-working sessions organized to identify possible synergies and alignment between projects and relevant actors that might culminate in a “collaboration day” which might take the form of placemaking events—e.g. micro-regeneration interventions, creation of a neighborhood community garden – as a leverage to make the proactive communities emerge and start test and prepare the actions for start of the co-design process.

The fourth phase, the prototyping phase, focuses on governance innovation. In this phase, participants and policymakers reflect on the mapping and practicing phases to extract the specific characteristics and needs of the community served. This phase also foresees the realization of co- design prototypes to solve the problems identified in the previous phases.

The fifth phase is the testing phase, that also includes evaluation. In this phase, the governance/policy prototype is tested through implementation, monitored and evaluated. The evaluation has both qualitative and quantitative metrics to assess. The evaluation is mainly aimed at measuring whether the implementation of the prototype is consistent with the design principles and objectives identified throughout the process by the different participants, similar to the ex post policy analysis that is aimed at determining to what extent it has performed as expected. (Wu & al. 2018, 124/128). Of course, evaluation methods cannot be copied and pasted uncritically. It is important to adopt the evaluation methods and techniques to the local conditions and the peculiarities of policy tools for urban co-governance. The evaluation was first tested in the Co-Bologna process. The evaluation was focused on the implementation of the Bologna Regulation, that indeed has to be considered a prototype also according to its article 35. The evaluation was carried from October 2016 until May 2017. The unit of analysis are 280 pacts of collaboration signed under the Regulation from March 2014 to December 2016. It was based on both quantitative and qualitative methods and consisted of three steps: 1) qualitative and quantitative coding of the pacts’ text 2) Survey for analyzing democratic responsiveness of the Regulation, addressing the civic signatories of the pacts 3) confirmation of the results and deepening of analysis through group interviews/focus groups with a respondents’ sample. On the basis of the results of this evaluation the City of Bologna as well as any other city which adopted a similar piece of regulation could transform the 2014 prototype regulation into a model regulation. Therefore, the utilization of the evaluation in the Co City cycle is that of policy learning (Dunlop, 2017) of two types: social learning, involving different types of actors from inside and outside governments and existing policy subsystem, in this case the actors of the quintuple helix of urban governance of innovation) and government learning, that involves reviews of program behavior by government actors and is aimed at improving the means by which certain policies are administered (Wu & al. 2018, 132-135).

Finally, the modeling phase, where the governance output prototyped and evaluated in light of the first implementation adapted to the legal and institutional framework of the city in order to ensure the balance with the institutional and legal urban ecosystem. This phase is realized through the study of urban norms and relevant regulations and administrative acts and through dialogue with civil servants and policy makers. This is an experimental phase involving perhaps the suspension of previous regulatory rules, the altering of bureaucratic processes, and the drafting of new policies which might also have a sunset clause and then a re-evaluation period. It can also involve the establishment of external or internal offices or support infrastructure in the city to support the policies and the “commoning” across the city.