This appointment was dedicated to completing the construction of their material prototype that is an entry point in cities, and it is also equipped with technological elements. This entry point will link to the immaterial protoype, that want to raise awareness on issues such as sustainable agriculture, nutrition, diet, sport, tech justice and many more.

Labgovers split into groups to perfect their prototype and demonstrated great organizational and collaborative skills. But they still have some things to do and for this reason we will meet again on Saturday 4th May in Luiss!

The LabGovers just don’t want to leave us!

Save the date: on 29th and 30th March will take place the fourth module of the Urban Clinic EDU@LabGov in Luiss Guido Carli University. This fourth module is mainly dedicated to ‘Urban Experimentalism’!

On Friday 29th March the workshop will take place in the classroom 305b from 16pm to 18pm in the Luiss Campus.

The Urban Clinic will host dr. Daniela Patti, expert in the urban regeneration and in the collaborative planning and co-founder and manager of Eutropian.org Research & Action (http://eutropian.org/). She will talk about cooperation in cities and successful examples of civic cooperation. In the second part of the workshop, Labgovers will listen to prof. Lorenzo Maria Donini, expert in nutritional principles and food science from La Sapienza University. This will represent an important step in the development of the digital platform that Labgovers have designed in order to raise awareness towards the importance of food, sport and agriculture for individual and collective well-being.

On Saturday 30th March from 10 am to 17 pm in room 310 of the Luiss roman Campus will take place the fourth co-working session. The Urban Clinic will host Vincenzo Maria Capelli, agricultural entrepreneur of the gardens and boating champion from Confagricoltura. He will talk to the Labgovers about his professional experience and the connection between urban agriculture, sport, entrepreneurship. The co-working session will be moderated from Alexander Piperno, PhD Luiss in economics and from the team of EDU@LabGov to support the students in order to add new wedges to the idea that they are developing and to strengthen the sustainability model. 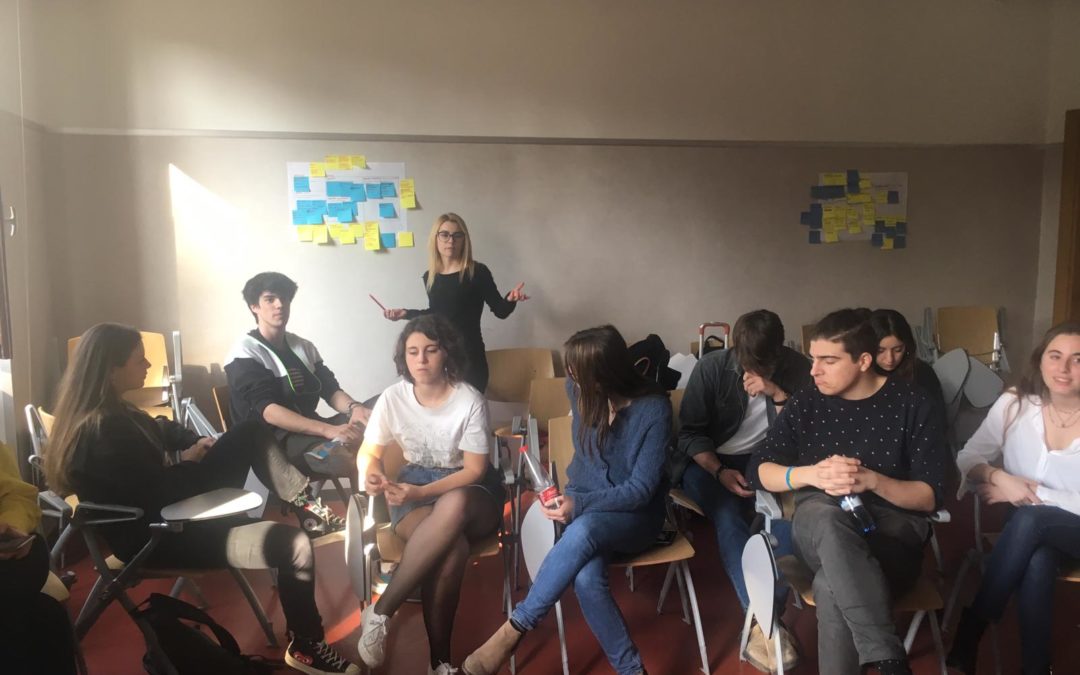 Save the date: on 15th and 16th March will take place the third weekend of the EDU@LabGov Urban Clinic in Luiss Guido Carli University!

Friday 15th March from 16pm to 18pm in the Luiss Campus, we will host a lecture of professor Christian Iaione about Urban Law and Policy, and we will hear the testimony of lawyer Nico Maravia from law firm Pavia & Ansaldo and of the dr. Paola Marzi from the Municipality of Rome, who will speak about the Regulation on the urban gardens that she wrote for the Municipality of Rome.

Saturday 16th march from 10am to 17pm, will be held the third session of co-working. It will be divided into two part. First, we will hear Pasquale Tedesco’s experience: he is an expert in environmental sustainability, sustainable and synergic agriculture and in the field of urban and social gardens. In the second part of co-working the EDU LabGov team, thanks to the guide of Chiara De Angelis and Daniela Patti, we will speak about the process of design focusing on the user journey maps. In this way, the LabGovers will analyze all the passages of their project, they will answer to the needs of the ‘personas’ (the users object of their project) and they will define the various sections and the categories of contents of the platform that they are developing.

The next meetings are very important in order to complete and improve the idea that it is taking form more and more. 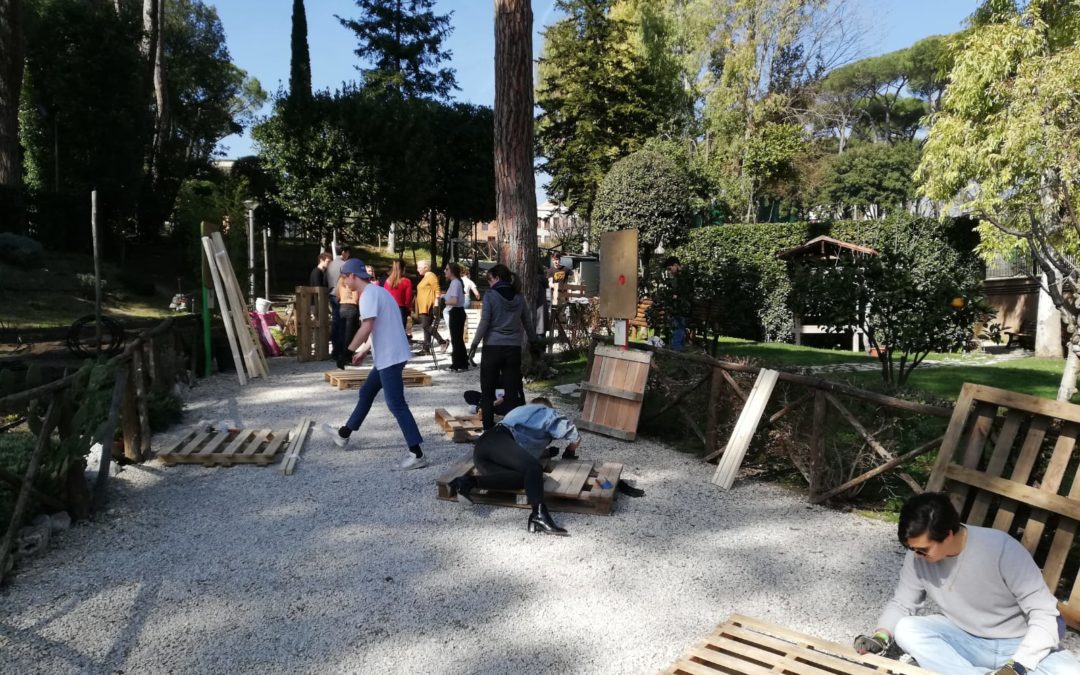 The process of the Edu@LabGov Urban Clinic’s action on the city/university territory continues with the Community Gardening session which took place last Saturday the 9th of March 2019 in the LUISS Community Garden from 10 am to 12 am.

Labgovers, at first divided into three groups, started working to the construction of three prototypes of their project, using waste/recycled. Following the project’s idea elaborated during the Co-Working sessions in class, and also thanks to the advices of agronomist and botanist, dr. Barbara Invernizzi, the students completed the structure with fruitful outcomes.

These two hours of Community Gardening represented the starting point of a process of collaborative action which aims to concretize the principles of sustainability and circular economy which are central for the Urban Clinic. Nevertheless, the self-construction Lab is still a fundamental collaboration-gym to understand the importance of respecting the timeline in a project.

The project is not over yet: others two meetings are scheduled in the LUISS Community Garden, one for the 23th of March and one for the 27th of April.

The Right to the Co-City

This study is an effort to contribute to the current urban studies debate on the way to conceptualize the city by advancing a rights-based approach and to suggest that to build such vision one needs to reconceive the city as a commons, which is to say that the city serves as an infrastructure enabling the “pooling” of city inhabitants actions, energies, resources and the cooperation between city inhabitants and other four urban actors thereby embedding a “quintuple helix” or “pentahelix” approach in the governance design of the city. Part I articulates the most prominent visions or paradigms of the city of the 21st century and the “metaphors” that are currently used to conceptualize the city. From an interdisciplinary perspective, this part then discusses some complications and emerging key points that deserve further reflection. In Part II, the article argues that a rights-based paradigm or vision in the conceptualization of the city is emerging. It does so through the analysis of urban laws and policies adopted in exemplary case studies such as Naples and Barcelona, on one side, and Bologna and Turin, on the other side. Two main rights-based approaches seem to emerge: the rebel city model and the co-city model. In Part III, to better define this fourth urban paradigm and in particular the second approach, a focus on the key concept of commons and a review of the main bodies of literature is provided which are key to carve out the concept of “pooling” as a form of cooperation that encompasses both sharing of congestible resources to avoid scarcity and collaboration around non congestible, constructed resources to generate abundance. Building on the existing literature of a particular subset of studies on infrastructure commons, the concept of pooling is extracted from the observation of how pooling as a demand-side strategy can both expand or leverage the idle “capacity” of an infrastructure to avoid congestion and at the same time generate abundance. Pooling is particular effective in explaining the main features of a peculiar vision of the rights-based city, the co-city approach, ultimately envisioning the city as an enabling infrastructure for social and economic pooling. Part IV offers concluding remarks and proposes the idea of the “right to the co-city” to build a body of urban law and policies advancing “urban rights to pooling” as a key legal tool to structure a commons-oriented interpretation of the fourth vision of the city, the rights-based approach.

The full-text article is available at http://www.ijpl.eu/archive/2017/issue-15/the-right-to-the-co-city