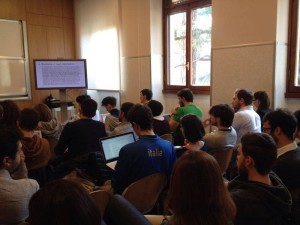 Katia Ballacchino, professor and anthropologist held the meeting about the theme of Intangible Cultural Heritage and Community. Specifically, an attempt was made to discuss ‘an anthropological analysis of the recent conventions starting from ethnographic case studies – a research methodology that provides technological activity by the individual’. This analysis passes through eight years of study. These years proved to be crucial for our country, for they started from a milestone decision of UNESCO of 2003, which recognized intangible goods as proper Cultural Heritage

What is an Intangible Good? It covers a whole range of practices, traditions, folklore, customs, which a community perceives it as a belonging. Moreover, it does not remain static over time, but it changes and becomes dynamic as the community itself changes. Some examples are the Festa dei Gigli di Nola, Santa Rosa in Viterbo, Candelieri Sardi and Carresi del Basso in Molise. First experiment of a participated national inventory has been when the Ministry for Cultural Heritage asked to think about the UNESCO candidacy as an indirect form to catalogue Intangible goods in their new consideration as proper assets. The idea arose from the debate on the food culture in the vicinity of Lake Bolsena

What is the advantage of gaining recognition  from UNESCO? It is basically a matter of intangible value. It brings a series of advantages ranging from commercial to political. Just think of how easily a promotion can be built on it, or how strong a political campaign can be starting from this success. As already said participation is today fundamental. Pompei, UNESCO World Heritage since ever, is paradigmatic. In the last years it has been registered a loss of interest from the community.

Ballacchino tell about the case of Festa dei Gigli of Nola in Campania. During the fest eight obelisks (heigt 25 meters and weight 25 quintals) are built and destroyed each year by the community on a self-financed base.  They represents the guilds of crafts and an homage to the saint Paulinus of Nola. Today’s obelisks are the result of an evolution of this tradition. St. Paulinus of Nola returns to the city on a boat to save Nola and its citizens. Nola has no sea , but historically extended to Torre Annunziata. Malformations of the shoulder due to the weight of the Gigli (Callus of San Paulinus). Such a disturbing image increases the idea of ​​belonging to the community. The physical sacrifice to carry each Giglio is an honor for every man. In the Campania region a processes of dissemination of the festival occurred. In many others community (Barra, Brusciano, Casavatore, Crispano, Cimitile, Mariglianella, just to name a few, some similar festivals took place every year). The paradox concerns the creation of a conflict between the neighboring towns, rather than a collaboration between areas with similar traditions. Which festival is ‘original’? Is there something as an ‘original festival’?

According to art. 2 of the Agreement of Faro, a convention for the protection of cultural rights, cultural heritage is defined as a group of resources inherited from the past that some people identify, regardless of who owns the property, as a reflection and expression of their values​​, beliefs, knowledge and traditions. It evolves as time goes by. It includes all aspects of the environment derived from the interaction over time between people and places. A community asset is made ​​up of people who attach value to aspects specific of their cultural heritage which they wish, within the framework of public action, sustain and transmit to future generations.

Other two examples have been given:

The Sicilian Puppets: Since being recognized by UNESCO as world heritage, the families of puppeteers paradoxically had more problems in terms of the traditional technique. After the production of the roof, thousands of young people have started to create “puppets”, although not perfect from in terms of production. This overproduction ended up in creating conflict, competition and lowering the overall quality of the festival.

The Carreri del Basso in Molise: Feast of just few minutes. It encompasses oxen and horses tied together to pull a wagon. Animal rights activists, for some time now, have denounced the violent attitude towards the animals. Horses are told to be doped for the festival, and the bleeding that can happen during the event, is just another alarm bell from this perspective. On the other hand, managers who run the stables are generally very careful towards their animals, and these are treated well all year long. This attitude is a reflection of a spirit of participation and respect towards animals.