LabGov’s Conference on “Land and new forms of legal order” 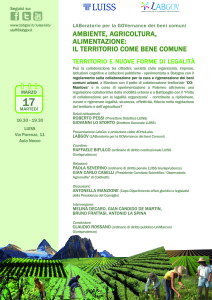 Is it possible to develop new forms of legal order through a strategy that better protect the territory of our country? How can legality become a cultural element shared by our community rather than being an abstract concept? These were some of the questions raised at the conference “Territorio e nuove forme di Legalità” that took place on March, 17th at LUISS University in Rome.

The conference was an opportunity for the Labgovers to show the projects, activities and achievements of the Laboratory, to receive valuable feedbacks and advices from the participants and to listen at their opinions on the topic of land and governance, which holds a fundamental importance of 2014/2015 LabGov’s edition.

The meeting was opened by LUISS General Director Giovanni Lo Storto, who explained that the reason behind his choice to create a community garden inside the University was “to allow the students to change the state of affairs by providing them with the instruments they need” and to provide them with “a gym where the students can share knowledge and grow together”.

The first speaker to take the floor was Paola Severino, professor of Criminal Law and LUISS Executive Vice Provost who affirmed that through “concreteness and fantasy”, students contribute to the debate. This qualities, which are fully shared by LabGov, are essential to develop the idea itself and the benefits generated by the Commons and to “make the concept of legality something concrete rather than abstract”. “Legality must be recovered with the contribution of the citizens, it cannot be passively waited”. The Professor then spoke about the importance of having “effective sanctions which can lead to concrete results” and which must be developed along with a strong “culture of legality”.

Then, the floor was taken by Gian Carlo Caselli, president of the “Osservatorio Agromafie” scientific committee. Dr. Caselli, started his speech from his personal experience against organized criminality in Palermo, and spoke about the importance of creating “citizenry participation through which the hegemony of corruption and misconduct can be interrupted”. According to Caselli, we need of “new paths to build legality which will allow us to enjoy rights in our territory”. “Trust in the Institutions must be built”, so that “legality will be seen not only as a set of rules but as bringing advantages to the whole community”. Caselli then concluded his speech with a critique to the indifference which amounts to “not taking care of the polis when we could instead cooperate and contribute to its development”.

The second part of the conference took the form of a round table in which the speakers contributed to the discussion by providing their numerous opinions on the topic.

Professor Melina Decaro, professor of public comparative law, asserted that “more than talking about the right to food, it would be more accurate to speak about a right to the natural capital”.

Professor Gian Candido De Martin, professor of public law, underlined the importance of “building a culture that can function as a frame for the rules”, because “what we need is not prohibition, but awareness of the value of common resources”.

Then, Bruno Frattasi (Head of the Interior Ministry Legislative and Regulatory Affairs Department) focused on the idea of “security and legality as shared goods that must be achieved through an alliance between public and private actors”, followed by professor La Spina (professor of public policies) who spoke about the need to have an “integration between a regulation coming from the centre and an organization from the bottom”.

Finally, the floor was given to Antonella Manzione, Head of the Council of Ministries Presidency Legislative and Regulatory Affairs Department , whose starting point was the importance of “creating the culture of legality and building an active citizenship through education in schools and families”. To properly manage the territory we need the citizens to participate and take care of it, but for this to be possible we need to support with some concrete normative instruments those individuals that are willing to get involved. Attempts to create these instruments have been made, as we can see in the article 24 of the “Decreto Sblocca Italia”, but this pieces of legislation are mostly unknown and unapplied. Manzione concluded her speech by reporting the words of a 17 year old girl, saying that what is really needed is “a space, both physical and mental, in which hope and future can be built”.

The conference was concluded with a greeting by Maria Letizia Gardoni, President of Coldiretti Giovani Impresa, and with her wish to see “the growth of daily gestures showing social and political responsibility”.