An Informal Settlement as a Community Land Trust. The case of San Juan, Puerto Rico

Photograph Line AlgoedLabGov has already talked about CLT (here and here) but this time is different. Fideicomiso de la Tierra, the name of the CLT that we examine today, is the first Informal Settlement Community Land Trust in the world. Created in a participatory way by government, residents and technical professionals, it was born with the purpose to preserve and develop informal communities along the Martín Peña Canal[1], a polluted canal around which a community of nearly 30,000 people lives – San Juan is in fact the most densely populated area in Puerto Rico

The CLT today works to solve land title problems in the Martin Peña Canal District, to avoid involuntary displacement of residents, to acquire and maintain properties for the community’s benefit and to facilitate residents’ involvement. It follows some precise guiding principles, such as the promotion of the residents’ participation in decision-making, the encouragement of equality, safety and access to basic services and the improvement of public spaces and transportation. The main goal remains the housing development and affordability, and for this reason the CLT cannot resell the land and it can only sell or rent housing for the members’ benefit. The CLT is an active actor in the local real estate market: the residents collectively own the land, lease the land in the trust, own the buildings and when they decide to sell the home the CLT can buy it back; in addition, in case of mortgage and problems with the loan payment, the CLT can intervene. It also supports residents with financial education and specific programs to promote citizens’ participation and critical awareness, to address and improve social justice, affordable housing, food security, violence prevention, youth leadership, adult literacy and local entrepreneurship. It should be noted that under the CLT residents are more protected from forced eviction than through individual titles and more safe from market speculation (the land is not owned by individuals, thus the value does not affect the house price). Today the communities along the Martín Peña Canal collectively own 200 acres of land that cannot be sold. 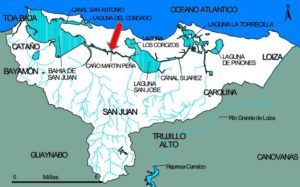 This is the current state of Fideicomiso de la Tierra, but the informal settlement of San Juan has a long history of disinterest and abandonment from the government, which failed during the years in installing proper sewage systems or cleaning systems with the consequence of many floods; the area indeed was originally established on mangrove wetlands without an adequate water drainage system, and every even mild rain storms led to flooding, raising sewage and polluted waters and causing health and environmental problems for the residents; in addition buildings never stopped to discharged row sewage into the canal.

For years the local communities demanded the dredging of the canal while fearing displacement and the rising land values typical of a neighborhood improvement. In 2001 the situation was so awful that the US Army Corps of Engineers intervened to dredge the canal and restore water flow. Finally, the government showed to be committed in revitalizing the canal’s conditions as well as the canal communities. An important process of connection with the communities started, and from 2002 and 2004 the government held 700 participatory meetings. These meetings represented a huge opportunity to connect residents and experts and explore the local concerns, presenting legal tools to preserve affordable housing and formalizing landholdings. Dredging the canal and revitalizing the communities meant to avoid residents’ displacement; and the creation of a collective land title, as the CLT, appeared to be the best idea to maintain alive the community. The meetings helped in collectively drawing up a formal development and land use plan, the Comprehensive Development Plan, then adopted by the Puerto Rico Planning Board. With the help of national and city government support, local residents and organizations set up a collaborative project called ENLANCE to help the implementation of the plan and to reply to some fundamental issues: to restore the environmental integrity of the channel, to protect the health and safety of community residents and to promote an inclusive, democratic city quality public spaces as well as wealth opportunities for the community. The residents created the Group of Eight Communities (G8), in partnership with the government and the private sector, to promote their economic, social, and community development throughout the establishment and maintenance of a CLT[2]. In the same year the Law 489/2004 entered in force and created the Martin Peña Canal Special Planning District[3], a district of 200 acres of public land transferred by the government to the ENLANCE project. The law also established the future incorporation of the CLT. With this law, many informal housing projects were regularized. ENLANCE[4] then became an independent government agency with limited-lifespan; it was and still is a crucial actor, a local intermediate that coordinates the project implementation in terms of housing development, infrastructures, dredging, canalization, and also in terms of urban socio-economic development guarantying the citizen participation and promoting the community empowerment. The ENLANCE’s board of directors (made by representatives from the public and the private sectors and of community residents) is appointed by the Governor of Puerto Rico and by the Mayor of San Juan; the community resident board members should be at least 45% of the board and they are indicated by the G8.

With the law the property rights of any land in the District were transferred firstly to ENLANCE and regularized. Residents gained the right to inherit and maintain ownership of their home, while the title of the land was of ENLANCE, guarantying the stability of the real estate values of the lands. To transfer the land title from ENLANCE to the CLT, from 2006 and 2008, three rounds of community workshops were implemented and the CLT’s General Regulations created, with the support of an Advisory Board for the legally formalization of resident’s needs and requests. Finally, in October 2008 the General Regulations were promulgated and the land transferred to CLT by formal deed on May 2009. The Regulations stressed the important role of the CLT as a “mechanism of collective possession in order to solve the problem of the lack of ownership titles” and to “avoid involuntary displacement” of canal residents.

In the following years CLT, supported by ENLANCE, made significant progress in terms of self-financing and human relocation of residents when required for the canal dredging. The goal is to become independent once relocations are completed and the work of ENLANCE completed. Today CLT makes money from selling homes, renting property, investing in the community and receiving donations. According to the Regulations, it must reinvest profits into the communities following the priorities planned in the Comprehensive Development Plan (such as using a revolving fund for infrastructure projects and buying properties) and when a resident sell the home it receives part of the proceeds. In addition, it can rely on the economic support (subsidies) from both public and private sectors and on a large group of volunteers.

Today the most difficult task is the relocation of residents still living very close to the canal, since their houses should be removed to allow the proper dredge of the canal. The process is quite long and today there are 1090 households to relocate (ENLANCE has already relocated 110), but all steps are made in a participatory way and always keeping in consideration the families’ needs and supporting them throughout the entire process (evaluation of the home, identification of a right offer, assistance on finding a new home for sale, pay moving expenses….).

The San Juan CLT in 2015 won a Building and Social Housing Foundation World Habitat Award, as a recognition for its ability in transforming the informal settlement of San Juan from a polluted and flood prone river channel into a sustainable community, and in providing a new model for improving informal settlement in cities. Fidecomisio de la Tierra represents the primary mechanism through which the local communities surrounding Martín Peña Canal are overcoming poverty; it has completely transformed the area and enabled the local community  to legalize the relationship between more than 2,000 families and the land on which they stay, to access to affordable and safe housing, to resettle in a fair way people living close to the canal in risk areas, to improve environmental conditions by developing basic infrastructures and dredging the canal, to ensure ownership, to learn how to collective manage the area and how to favor the community participation.

Fidecomisio de la Tierra is a unique model of social justice in Puerto Rico; it has already proven to be successful in the US where over 247 CLT promote the revitalization of marginalized communities and the development without displacement, and today it is considered a model of self-improvement and sustainability, as well as a model of local participation and collective action, also for other informal communities around the world struggling with development and gentrification.

[1] The news was reported by RioOnWatch, a program to bring visibility to Informal Settlements’ community voices  born in 2010.

[2] The G8’s board is composed by representatives of 12 communities organizations annually chosen in community assemblies.

[3] The District refers to an area composed by the seven communities that lived along the canal and wanted the creation of the CLT.