The second workshop of LabGov EDU 2016/2017 has been held on the 4th of November by Simone D’Antonio, an Italian urban journalist and communicator, member of ANCI and responsible for the activities of the Italian URBACT . He discussed with the class how the development of cities in the global scene is protected and followed by the international institutions. 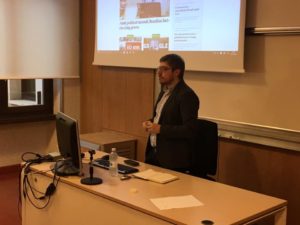 Firstly, he introduced some international projects, like the European initiative “URBACT”, but above all he spoke about Habitat III, a meeting organized by the UN every 20 years to rewrite the New Urban Agenda. This year Habitat III took place in Quito, Ecuador, one of the few countries that provide the “right to the city” in its constitution. Due to its complex morphology, it is always searching for new solutions in order to adapt the cities to the territory facilitating all the citizens.

Next, he illustrated the “KNOW YOUR CITY” project, designed to give a voice to everyone who usually suffers in silence, like some African slums’ inhabitants or young Muslims who live in Middle East war zones, that show their own tragic realities with their strength.

He continued, talking about the “shrinking cities” phenomenon (that is unfortunately becoming frequent in our days, in many cities 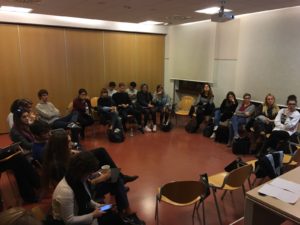 such as Detroit), and the meaning of being an urban journalist; someone who is interested in finding solutions to the cities’ problems, through knowledge and communication. He underlined the importance of communication (through new media, internet, social networks), arguing how it’s important to build information networks in order to realize projects and create new economic systems, as the supportive one adopted by some marketplaces in Milan, after the Expo experience, in order to fight against food wasting. (link to know more about the experience in Milan: https://www.theguardian.com/cities/2016/oct/16/milan-fight-against-food-waste-ugly-fruit-grassroots-world-food-day)

It is a good habit to be constantly informed about what is happening around the world in the urbanistic sector and to be aware of who makes the difference by giving birth to initiatives and projects, because we are all parts of this big scenery.