Citizen Sensing for a co-governance of the risk: the Fukushima Safecast case 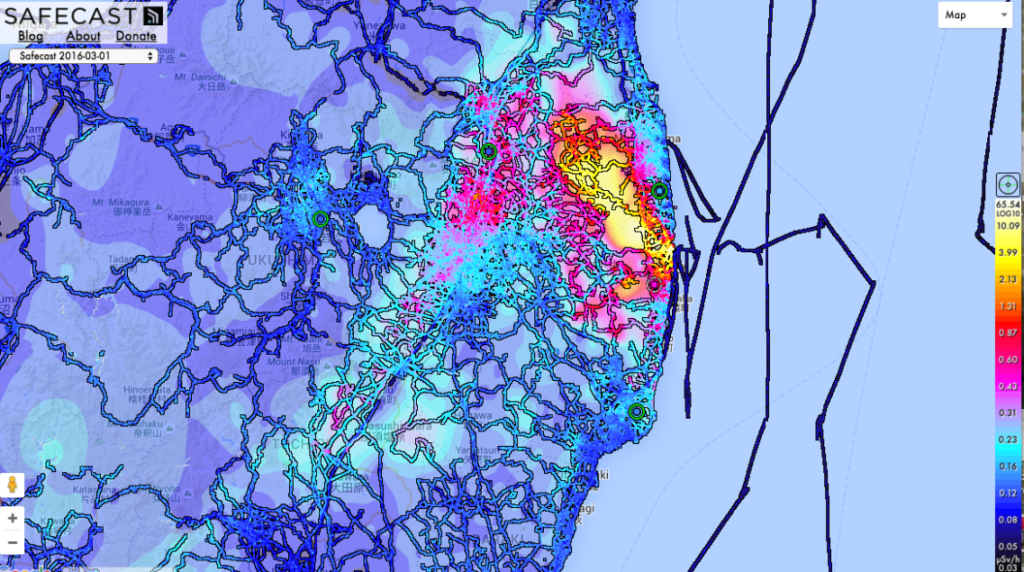 It is nowadays plain that climate change, pollution and other environmental hazards directly and indirectly affect the physical, social, and psychological health of humans. This public and environmental health risk could be minimized with effective adaptation strategies and proper governance. People are increasingly becoming aware of the preventability of these risks, and push for a change in the way in which the risk is communicated and managed. When the institutional players responsible for taking action show a dominant attitude of inertia, lay citizens tend to react in defence of their right to an healthy environment and – in case of urban settings – their right to the city. This contribution focuses on how non-expert people take advantage of technology (in particular sensors and open access data infrastructures) to visualize, monitor, report and combat threats caused by environmental factors to public health. The practice is labeled as ‘Citizen Sensing’ standing for bottom-up initiated monitoring initiatives based on ICT, in general, and, in particular, on sensors.

The ‘Citizen Sense’ [1] project (2013 – 2017) states the following about Citizen Sensing: “Practices of monitoring and sensing environments have migrated to a number of everyday participatory applications, where users of smart phones and networked devices are able to engage with similar modes of environmental observation and data collection. Such ‘citizen sensing’ projects intend to democratize the collection and use of [..] sensor data in order to facilitate expanded citizen engagement in environmental [health] issue”.

From this statement, it can be inferred that Citizen Sensing is a practice of monitoring environmental (health) factors using smartphones and networked devices, which may foster citizen participation in tracking environmental (health) factors, including risks. The words ‘everyday participatory’, ‘democratize the (data) collection’ and ‘expanded citizen engagement’ may show a link with the underlying values that inform the governance of the commons. Citizen Sensing finds indeed its legitimacy and justification in the right the citizens have to the collective governance of the benefits and risks that have impact on their health and wellbeing. This goes from the co-governance of a park for the better living of a neighborhood, to the co-management of a risk (e.g. air pollution) which affects a certain community.

The potential of Citizen Sensing for an urban renaissance can be illustrated through an example regarding a well-known case.  On 12 March 2011, a hydrogen explosion occurred in the Japanese Fukushima Daiichi nuclear power plant [2]. The residents of the area were advised to stay inside and avoid any contact with the surrounding environment, including breathing the outside air and drinking tap water. The population living in the surroundings of the plant was evacuated. A second explosion occurred on 14 March worsened the radiation level. Soon, the shortcomings of the government monitoring system emerged (Hemmi and Graham, 2014) [3]. The state system was indeed based on a network of fixed sensors that used models to calculate radiation levels. This meant that numerous locations could not have been checked, which caused anxiety and mistrust in the dwellers exposed to the risk of radiations. The state approach in this case is a clear example of the ‘linear’ way of governing environmental risks to public health by the institutional actors responsible for those risks (Fisher, 2017) [4]. Generally, the institutional approach is based on high quality monitoring equipment requiring a considerable expense and continuous labour, which often leads to low spatial and temporal resolution. Furthermore, this monitoring often leads to results which are not easily accessible by non-professional citizens, thus contributing to create a knowledge gap between those exposed to a certain risk and those having the recognized ‘expertise’ to address that risk. As registered in the Fukushima case, this approach is likely to cause a sense of public skepticism about how the institutions are facing a certain risk. This leads, on one side, to a disruptive tendency (criticizing and rejecting the established system of risk governance), but, on the other side, it constructively stimulates alternative ways for governing a risk, and a push for a co-governance of it.

In the case presented, the aforementioned tendency can be identified in an increase in the sales of radiation monitors purchased by citizens who wanted to measure their exposure to radiation. And they did not limit to that. They organize themselves in an organization, “Safecast” [5], devoted to open Citizen Science for the environment and, in particular, for radiation monitoring after the Fukushima accident. The web-based platform was established in 2011 by a group of volunteers with the aim to make publicly available accurate and trustworthy radiation information, with a view to complementing or substituting the insufficient official information. On the today still existing platform, the data are visualized using Google Fusion Tables to produce maps. Specifically, the Safecast Map depicts over 4,000,000 radiation data points. The map is fed with ad hoc data collected by citizens through low-cost radiation monitors. The data are licensed with a Creative Commons 0 license, which allows anyone anywhere in the world to use the data for any purpose. The trend from few, expensive, state-owned sensors to many, widespread, publicly-owned monitoring devices shows the need for an horizontal transparency, which entails even access to information and reliance on bottom-up produced knowledge. The success of the initiative demonstrates how technological innovation can play a key role in enabling collaboration and sustainability within and beyond the city, and can enhance co-governance of common resources as well as of common risks.

Cases like Safecast indicate the willingness of people to see their right to live in a healthy environment in action, and their commitment to have it enforced through the legal, social and even technological avenues available to them. Thorough research is needed on the influence of bottom-up citizen sensing on the governance of public/environmental health risks and on its acceptability from institutional stakeholders. There is a high demand for reflections on alternative/complementary ways to face today challenges and Citizen Sensing practices may be part of the answer. Despite its potential, Citizen Sensing will be often disputed on the basis of alleged deficits of legitimacy. Nevertheless, the values deriving from theories of urban co-governance, the principles supporting the right to a healthy environment and a conceivable right to the co-city/co-governed living environment may lay the foundations for contesting similar arguments.

[1] For a recent definition of Citizen sensing see the CitizenSense project: http://citizensense.net/about.

[5] For the Safecast platform see https://blog.safecast.org/about/.