“Collaborare è Bologna”: the new way to think of the city

“Collaborare è Bologna” is a project of the City of Bologna, managed with the Bologna Urban Center and various partners to promote a “culture of collaboration” with continuous and consistent community involvement,and to make technologies, resources, spaces, knowledge, skills and information more accessible. In this framework, on 19 May 2014, the Municipality of Bologna approved the “Regulations on the collaboration between citizens and the Administration”, for the treatment and regeneration of the commons. This is an instruction manual for a collaborative dialogue between the public, private and community spheres, a tool that seeks to simplify and promote forms of collaboration in the management of the commons, implementing the principle of subsidiarity provided for by the Constitution in its 118 article.

The project is divided into three sub-projects, designed by listening the citizens and letting them cooperate with associations, institutions, firms and interest groups:

> Fare_insieme: projects for the treatment of public spaces (i.e islands for underground waste collection, new lighting and upgrading of the main public spaces of the center, projects for cleaning the urban spaces, contrasting graphic vandalism, teaching citizens the shared care of open spaces).

> Vivere_insieme: projects with an innovative approach on many issues. Starting from mobility, for a city in which citizens are moving on foot, by bike and on public transport until the creation of projects in areas with specific problems (Pilastro and Bolognina are the interested zones).

> Crescere_insieme: projects in which public places become collaborative spaces and engines of economic development. The project provides a digital network infrastructure in step with Europe, to promote Bologna as a City of Food and renew the relationship between the university and the city.

From October 22 to December 3, 2015 a series of meetings will take place in different neighborhoods and with an online consultation for the citizens to define the priorities of the city.

The path was created in order to strengthen the collaborative ties and develop priorities, to implement the energy of the city and the ability of citizens to collaborate.

The Municipality is organizing six meetings, one for each district to activate a digital platform where citizens, schools, businesses and associations of Bologna will contribute to the emergence of the urban commons and draw a map of the urban regeneration projects and future actions. The aim is to design together a view of the commons to implement the available European funds, with the support of the regional and municipal authorities.

The round tables are organized with the direct participation of the citizens; the focus is on discovering the priorities of citizens and neighborhoods. Which are the places that need special attention?

Each meeting tries to answer to practical questions, and the participation of Neighborhood Presidents and the Mayor is an unique opportunity to present the measures already implemented and funded (relative to the district headquarters of the meeting) with a strong focus on the regeneration projects in progress and current demographic changes.

Each meeting is built on working groups, and for two hours all present citizens can intervene and bring out, area by area, problems and potential solutions.

The project “collaborare è Bologna” is organized by the city of Bologna with the collaboration of the Neighborhoods, Urban Center Bologna, ASP – Company Public Services for the person, IES – School Education Institution and the Institution for Social Inclusion and Community. The official hashtag is #collaborarebologna— search it on Social Media. For more information, write an email to gestionecomunita@comune.bologna.it. The next meeting’s programme of December 3rd is already online on the website: www.urbancenterbologna.it. Change begins with participation, and participation begins with you! 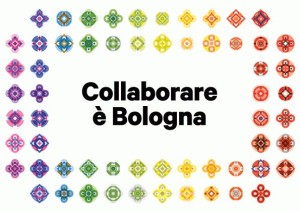