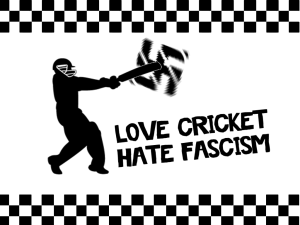 What we are going to write about today is a bit out of our standards, but it is a news worth spreading.

We are going to talk about a crowdfunding campaign for a documentary, a very particular one which is based on a true story set in Rome.

I will start by saying that “IT’S NOT CRICKET!”, and you have to read this exclamation in the sense given by McGraw-Hill Dictionary, namely “it is not acceptable!”

What is it that is not acceptable, or better, that is no more acceptable?
A very thorny answer must be given to this question. It regards immigration and immigrants, racism and social inclusion, and consequently it is about militant and productive antifascism, and forms of protest which are so unique as to bring a movie director to decide to film a documentary about this story.

Let’s try to explain all these issues form the beginning.

This is a real story about Piazza Vittorio Cricket Club, a glorious cricket team that no longer exists, and about the attempt of re-establish it.

Here in Italy we are getting to know cricket thanks to the immigration streams that permit us to understand that soccer, together with few other mainstream sports, is not the only activity practiced during the weekend!

Actually, cricket is the second most practiced sport in the world and it is the most important sport in very populated countries such as India, Pakistan or Bangladesh. Here we have the first precious gift given to us by the immigration flows, that is the mixture of customs and habits of different cultures, the realization of a Melting Pot (that became popular thanks to Israel Zangwill’s play, first staged in 1908!).

Edoardo Gallo was the coach of Piazza Vittorio Cricket Club and, during an interview released in 2011 for the newspaper La Repubblica, he explained how the team was born and what are the principles behind the project. He affirmed that “the team was founded in 2006 and, at the very beginning, we have worked on the territory, trying to involve all the citizens from Piazza Vittorio neighborhood. Then we extended the possibility of participation to every young folks beyond Piazza Vittorio and we started organizing cricket games.”

Then he fully explained why they chose cricket among dozens of possible sports: “cricket itself has distinguishing features which foster respect for the opponent and for those who are different from us and far away from our culture. Our aim was to bring together these guys of different nationalities, and to realize a racial and culture integration through the cricket”.

The other coach, Federico Mento, thanks the UISP of the city of Rome and his project “Lo sport per tutti – Sport for everybody”, through which it was possible to use sport as a tool for the social inclusion of foreign communities in the Italian social fabric.

How does this beautiful story go on? In 2013 the project has stopped because, as we can read on the crowdfunding platform webpage, “the young men have now turned eighteen. Some of them play on pick up teams or in the streets, while others have stopped playing. The experience of the Piazza Vittorio Cricket Club today is just a memory, but it has been an important cultural training. At the end of this cultural experiment, all the boys sadly refused to integrate with the Italian culture and society. Almost all of them went back to their original communities, Bengali with Bengali, Sri Lankan with Sri Lankan etc. I would like to investigate the experience of everyone involved and try to understand why this project failed”.

So, the admirable aim of Jacopo de Bertoldi is to raise 15,000$ in order to film a documentary about this great story, and to make the audience look between the lines and think about diversity, inclusion, and issues of latest political relevance, such as the growth of neo-racist political parties in the European Union (as Matteo Salvini’s italian Northern League proves). And to make everyone scream: “IT’S NOT CRICKET!”

For the ones who have read the 2008 novel “Netherlands” by Joseph O’Neill, a parallel could easily be made.

Actually the main character in the book can be compared to all the people who want to give voice to the Piazza Vittorio Cricket Club social experiment. At some point in the novel, Chuck says: “All people, Americans, whoever, are at their most civilized when they’re playing cricket, and what’s the first thing that happens when Pakistan and India make peace? They play a cricket match. Cricket is instructive, Hans. It has a moral angle…. I say, we want to have something in common with Hindus and Muslims? Chuck Ramkissoon is going to make it happen. With the New York Cricket Club, we could start a whole new chapter in U.S. history. Why not?”

We do want to stop political and social criticisms against such important and innovative experiments. Not with arrogance or violence, but by making people meditate on the issue of diversity.

In my opinion, touching the issue of diversity could only implement the awareness of being citizens of the world and, most of all, social relations can be tighten up thanks to initiatives like this.

This is a clear example of an intangible, cultural Commons, that must protected and enhanced.

These guys deserve more attention and full support; here you are the link to donate.

Pictures for this article have been taken here, and here. Please, follow the links for further infos.