“CO-Cities and CO-Territories”, how to create cities and territories where we can share, cooperate and collaborate. This was the theme of the Second Edition of the Sharing School which took place in the city of Matera, European Capital of Culture 2019, from the 27th of April to the 1rst of May. The School, organized by LabGov, Casa Netural, Collaboriamo and Progetto RENA, with Airbnb as a sponsor, offered to all its participants the perfect occasion to understand why and how we need to re-design urban and rural areas in the age of sharing economy, with the guidance of numerous instructors highly experienced in this field.

Just arrived in Matera, the students had a warm welcome in the beautiful location of Casa Natural, where a Welcome Sharing Party took place, an occasion for everyone to learn more about the Sharing School, its program and its organizers, but even more to get to know each other and to socialize while sharing a marvelous dinner prepared by the chef Gino. The day after, everyone was eager to begin.

28 April: The first one who took the floor and opened the works of the sharing School was Marta Mainieri, founder of 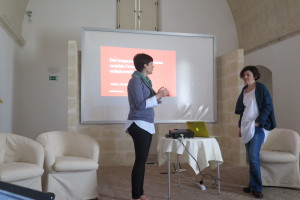 Collaboriamo, who introduced us to world of sharing economy by tracing its history from 2011, when people rediscovered the importance of sharing and cooperating as an answer to the economic crisis, to our days, where the sharing economy is in continuous evolution. We then looked at two cases of cities in which the principles of collaboration are put into practice. Michele D’Alena presented the case of CO-Bologna, where a collaborative city was built by the five actors of polycentric governance working together and generating the Bologna Regulation. The case of Campi Bisenzio was then introduced by Rosanna Prevete, project manager of Progetto RENA, who spoke about how sharing economy can be promoted in the context of a smaller city, by combining resilience and collaboration.  It is important not to forget that collaboration does not end when we leave the street and enter the house, as Marta Corubolo (HousingLab and Polimi DESIS Lab) showed us by talking about the collaborative housing.

A fundamental point underlined by Saveria Teston, urban strategist freelance, in her presentation of the process to define the strategic masterplan for the regeneration of the ex SADAM area in Jesi (belonging to the Maccaferri Group), is to always begin from what is already present on the territory and to start from there with the co-design project, involving in it as many actors with as many competences as possible. This point perfectly applies to what is being done in the CO-Roma project by LabGov: as Eloisa Susanna explains, for each context in which you work you have to design a suitable form of governance, and act in order to accelerate those processes that are already in place.

Collaboration takes different forms, and a beautiful example of this is the Ecomuseo Mare Memoria Viva of Palermo, a project presented by Cristina Alga, which contributes not only to the regeneration of the city, but also to the one of its community.

Alongside with all these enriching interventions, the first day of Sharing School also saw the presentations of the five 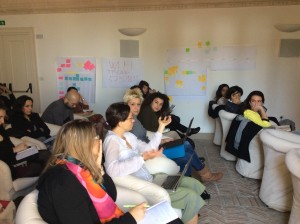 selected projects, which have then been the focus of the co-working and co-design laboratory engaging the students in the following days. The First project was Collaborative polis – sharing neighborhoods for an inclusive community, presented by Silvia Sitton, who aims at physically building a collaborative neighborhood, which will be the basis for the creation of a culture of collaboration. Similarly the project Civic Crowd Founding for Formigine, introduced by Giorgia Bartoli, wants to increase collaboration by transferring new competences to the community and creating deeper links between citizens and between associations. Another project is Valnerina Smart Land, brought to us by Marco Ferrucci, who imagines a way to regenerate the area with endogenous actions originating from the territory. Another interesting reality was presented by Rossella Lombardozzi, founder of Officine On/Off, a cooperative who works to support youth employability through the development of competences then will then be given back to the community in the form of increased social capital. The last project, introduced by Lucia Lupi, was First Life, a platform which works as an archive creating connections between actors present on the territory according to their interests.

To end the day with a bang, all the partecipants had to collaborate and find their way around without getting lost between the beautiful and ancient Sassi of Matera.

29 April: “the human being is a lacking animal, who has as its only resource its ability to adapt to the environment he encounters”. With this quote, the sociologist Falviano Zandonai began his considerations on the “CO” Organizations, where CO stands for Commons but also for Collaboration and Cooperation, two practices which are components of the human nature and need to be brought back into our practice through a social innovation 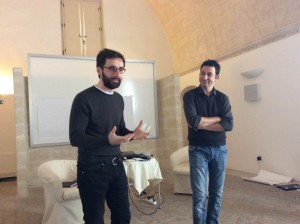 process. In line with this idea is the reasoning of Professor Christian Iaione, coordinator of LabGov, who stated that competitive or collaborative people do not exist – what exists instead are the conditions that make a person competitive or collaborative, and it is on this conditions that we need to work. But how can we work on this? Many elements of reflection came from Annibale D’Elia (Bollenti Spiriti), who spoke about the importance of changing the metaphor we use to look at reality in order to change ideas. We have to move from a view of society as an organism, with a head taking decisions, to a view of society as a net in which everyone is connected and collaborates. Seeing society as a net of interconnected people also involves a change in which services are designed, from the bidirectional relationship between supplier and consumer to collaborative services activated through the participation of all actors: this is what Daniela Selloni, service designer and creator of Cittadini Creativi, proposes. Collaboration can be found also in techonology, as Lorenzo Brambille, co-founder of Collaboriamo, explained us: from the PDF and HTML to Open Source and Copyleft, some technologies are born to be collaborative and to increase collaboration by granting access to everyone.

Overflowing with new information, the students spent the afternoon working on the co-design of the five projects, profiting of the instrument and the support offered to them by GuglielmoApolloni, Marta Mainieri and Andrea Paoletti. But it doesn’t get over here: in the evening we came together in Casa Natural to discuss with Matteo  Stifanelli, 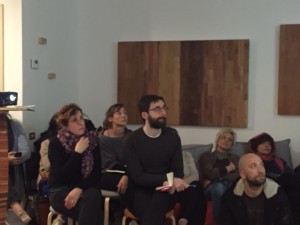 Airbnb Country Manager for Italy, about the risks and opportunities involved in a kind of hospitality that wants to transform the tourist in a temporary citizen. At the meeting were present also some local stakeholders, interested in discussing the hospitality options that could be suitable for Matera 2019.

30 April: Which are the new competences needed in the age of sharing economy?  A combination of new and old  competences, strengthened faith and growing relationships are, according to Andrea Pugliese (Progetto RENA), fundamental in increasing resilience, both of the individual and of the community.

The experience of Casa Netural (co-founded by Andrea Paoletti and Mariella Stella) shows us that by experimenting we can face some failures, but we are able to build a community based on simple and strong relationships, like the ones that we cultivate in our home. By going on the territory we manage to create connections, to activate

idea and to write a new story of the territory which is shared and participated.  One more examples of how sharing economy can generate social inclusion comes from the project Sfrutta Zero, a cooperative reality which includes migrants, farmers and young unemployed by giving them a job and by getting them involved in the construction of a clean and collaborative production chain. The tomato sauce produced by Sfrutta Zero becomes a locally produced alternative to the big distribution chains, and allows for better conditions of workers and empowerment of migrants and local farmers. All these examples stimulate us to reflect on which form of governance can allow the creation of more collaborative and inclusive cities. As Professor Christian Iaione tells us, the city needs to become a laboratory, in which people not only make use of the urban commons, but they also collaborate in their care and regeneration as “ the community is the one who defines the governance’s perimeter, so we need to work from the bottom to build a cohesive system”.

After a second afternoon dedicated to the further development of the students’ projects, Claudio Gnessi presented us the experience of ILoveTorpigna, the regeneration process that is taking place in the Roman neighborhood of Torpignattara.

1 May: The Sharing School was approaching an end, but before parting we had the occasion to present the 5 projects in their new form, resulting from the co-design process to which all the students and experts contributed. From Officine On/Off, to the Civic Crowdfounding for Formigine, Valnerina Smart Land, First Life and Collaborative Poleis, all the projects resulted enriched from the collaborative process, and the participants managed to design the next steps towards the achievements of their objectives.

The Second Edition of the Sharing School came to an end, and the moment arrived for all the participants to leave, but there is much that we will all bring home from this experience. The Sharing School taught us the importance of experimenting with new ideas without being afraid of failing, of starting from what we have and changing the metaphor we use to look at reality, of building the conditions needed for everyone to become collaborative. It was an occasion to learn, from the experts who shared their knowledge with us but also from all the participants who shared their ideas, projects and energies. 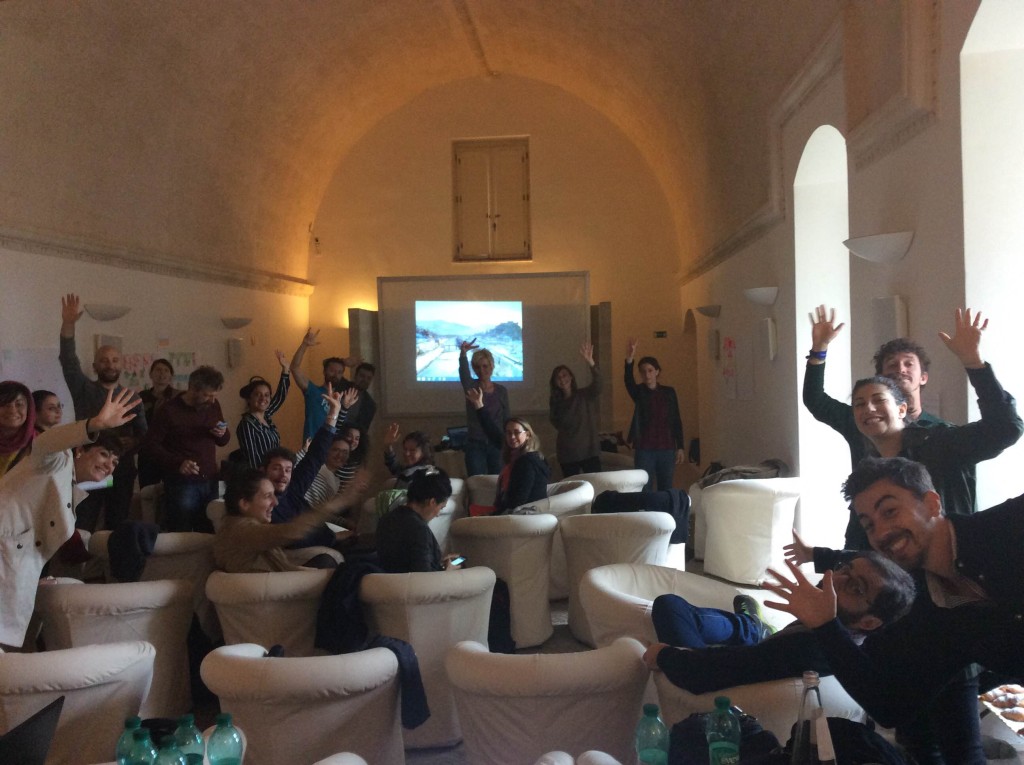 We say goodbye to everyone, knowing that this is only the beginning and many occasions will come to gather again and keep working towards the construction of collaborative cities, territories, communities and beings!