The impact of universities on society: Working on neighborhood commons in San José, Costa Rica

As part of the LabGov research and extension program for Costa Rica, the Architecture students of the Universidad Latina continue to apply the concepts of common goods to the city, collaborating with the community of the Cedros neighborhood, in San Pedro de Montes de Oca, an area of the capital of Costa Rica, San José. 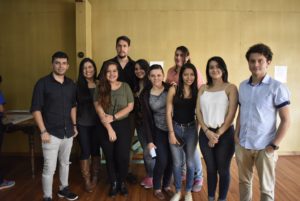 The process that was carried out in the first months of 2018 began with the realization of an analysis of the community, followed by the setting of objectives and schedule of activities to be carried out as a laboratory and as workshops. The project could be carried out thanks to the help of the community and also of the Scouts group in the area. Starting the investigation, surveys and talks were conducted in order to have more accurate information to project the needs. The best option was to involve the community around the coexistence space that belongs to it and is part of their daily routine: the neighborhood park and the community hall.

As a result of the activities carried out, certain problems were determined in the community, specifically in the sector near the Community Hall and the School of Cedars, which, indeed, as had been observed in the first stage, are the areas most used by the neighbors.

Based on the LabGov methodology, the research group applied the Co-city protocol: knowing, mapping, practicing, prototyping, testing and modeling. In order to achieve a shared city, it was proposed from the beginning to promote in the community the appropriation of public space through specific interventions and achievable with short-term actions that did not come exclusively from the group of researchers, but from the members of the community itself. In this way it was concluded to carry out an intervention with urban furniture, since fundamentally public areas only lend themselves to certain defined uses (field/court sports and indoor congregation activities) and lack comfortable and simple facilities to sit, rest and socialize in the outdoors.

An initial challenge, before starting any project, was to make the community aware of what the common goods are. And how this information could be transmitted in a way that was co-constructed among all.

The commons are resources and networks that sustain life, and although their legal possession may be of a certain group or community, or an individual, they are used by all and of all is the benefit.

Taking into account that every resource becomes common through a process of work and regulation, we wanted to focus on finding and recognizing the Common Goods with the Cedros Community, as well as later introducing a set of new goods to take care of and reproduce: the urban furniture produced with recycled pallets as the main material, which were implemented according to the needs of the community.

The common goods, in addition to achieving citizen participation and creating urban awareness, also help to create an environment of collaboration and equality: as it is related in Peter Linebaugh’s book about “El Manifiesto de la Carta Magna” and the Forest Charter, for a long time, humanity has sought to create a more equitable society, through documents created so that common goods are preserved and protected. Based on these texts it has been shown how this legacy has remained over the years and it is our obligation as citizens to watch over the common goods, since being shared brings benefits for all. Likewise, not only should they be preserved, but improved with the help of a community structure that, in mutual agreement, fosters good communication and teamwork. With this, goods can be renewed over time and could be used by our society and inherited by future generations [1].

On the other hand, as clarified in the book “La Carta de los Comunes”, common goods are not only translated into public space or, in the case of our intervention, in urban furniture, but they go much further, contemplating the goods to which we all have access in our daily life, such as water, air and other natural elements. It is from these fundamental commons that awareness must arise for responsible use. In other words, we cannot limit ourselves to taking care of the benches of our park, if our rivers and seas are full of garbage. For this reason we have sought ways to encourage the recognition of different types of common goods by the young population of the community, involving them in the first person in the care of these goods; so that in a broader way they focus on taking care not only of the community’s assets, but also beyond, an heritage such as water [2]. 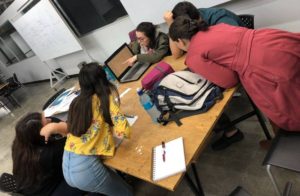 The decision about the prototype to be proposed was taken after making several field visits and noting that the large green areas had a space dedicated to a small playground and a court. However these are not used due to various problems, among them, the easiest solution was to solve the absence of adequate equipment for living areas. Therefore, it was decided to create functional and modular furniture that could later be replicated by people, remaining as a prototype model that the community could build alone, when it needed more furniture. Trying to create a quiet, cozy and safe space to share with the children, this also required garbage dumps, to have a space free of waste and at the same time educate the recycling. 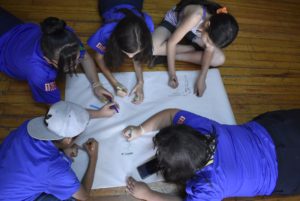 Within the activities programmed to achieve this project, the workshop was aimed at young people between the ages of 9 and 16. This got a very positive response from them after working on the book quoted above from the “La Carta de los Comunes” [2]. With this, they were able to understand the importance of greater participation and allowed to spring up in them a sincere interest for the care of our goods. 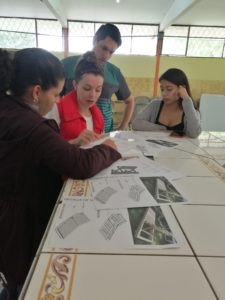 In the development of this project, a positive response was observed from the members of the community to get involved in decision-making. This was proven in the workshops held, such as the furniture-manufacturing workshop, in which the young people were willing to collaborate and thus they were even more incentivized to preserve these goods, since they were involved in the design process as well as manufacturing, manifesting feelings of appropriation on his part.

This type of activities developed together with the neighbors, generate a tangible impact on the communities, since that attitude arouses the interest of other nearby communities, making it replicate and have an impact at the country level, and at a global level as part of the LabGov program, which aims to be a network of local efforts as the ultimate goal of these actions.

As an added value, in the case of this urban laboratory in the Community of Cedros, it was intended from the beginning to strengthen and promote self-management and not the resolution of a specific problem by external actors. Therefore, the necessary tools were provided for any citizen to be able to repeat or adapt the models proposed in this prototype, through an open technical manual and editable 3D files, accessible to anyone who requires it, within the framework of the Creative Commons concept.

It is very important for urban life to achieve coexistence among its citizens through the use of public spaces that the city offers us. However, the urban space by itself does not work, because it needs to be thought for and by the citizens, used and cared for by them in a continuous and organic way. For this reason, academic interventions are not an achievement but a stimulus to revitalize these spaces as social nodes.

In Costa Rica, despite the renowned democratic culture, people still need to be empowered on the subject of civic rights and duties, and to become active and participatory members of the city’s spaces [3]. This is achieved through the management, methodologies and tools of citizen participation, which give a reason of real use to those spaces. The development of this management was done in coordination between the Creative Campus of the Latina University of Costa Rica, the Cedros Integral Development Association of Montes de Oca and Plataforma de Integración Ciudadana, thanks to the participation of the community and organized groups as the Guides and Scouts of Costa Rica. 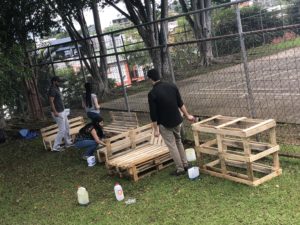 The LabGov program of Costa Rica seeks to involve the students of urban design courses in a process of research and extension in order to experience and understand processes of innovation in urban design, not limited to the drawing stage but to processes of co-design management. This not only in order to achieve a broad citizen participation and create an urban awareness of care and maintenance of the urban commons, but also to understand the students as qualitative researchers and community stakeholders, which can – and should – be involved in social projects.