The Public Archaeological Park of Centocelle

LUISS University and LabGov have achieved an important goal at European level! They are, in fact, involved in the project “OpenHeritage” admitted to funding in the Horizon 2020 program: LUISS University is part of the interdisciplinary EU consortium for the realization of the project.

The project “Organizing, Promoting and ENabling HEritage Re-use through Inclusion, Technology, Access, Governance and Empowerment, (hereinafter: OpenHeritage)” aims at creating, testing and optimizing an inclusive governance model of adaptive heritage re-use and an interdisciplinary toolbox which will be tested in six diverse Cooperative Heritage Labs (CHLs) to produce usable and transferable results. The main idea behind the project is that abandoned or underused buildings, areas, which have a symbolic or practical value for heritage communities, represent also important instruments and opportunities to increase social cohesion, introduce innovative bottom-up economic activities and create employment opportunities.

Starting from the assumption that the heritage preservation and management efforts are often inefficient and unsustainable, and from the assumption that local communities can play an important role in solving this lack, the starting point of the project is the possibility of empowering the local community in the redevelopment process of cultural heritage sites. Hence, the work will be based on the concepts of heritage community and participatory culture. The methodology adopted is built on a case-study approach on the one hand, and an action research methodology on the other. An important goal of the project is the development of innovative financial tools in order to develop alternatives and to enable local communities and their actions to be economically sustainable.

The work plan and the role of LUISS-LabGov

The work plan consists in 6 working packages and the work is built around the following guidelines:

LUISS University is involved in work packages number 2, 34, 5, 6 and 7: in  WP2, it will lead the task on the analysis of 16 Observatory Cases (OCs). The OCs are existing re-use cases, dispersed across Europe that provide the micro level perspective in the multi-level analytical framework of OpenHeritage. The OC analysis will be based on three main pillars of OpenHeritage:

and will contribute to establishing new tools to support adaptive re-use, will provide ideas for the 6 CHLs and help to  identify the main bottlenecks and drivers of adaptive re-use today, also contributing to the work on the transferability matrix as well . The Luiss-LabGov team will play a major role in work package 4, which consists of setting up, managing and evaluating the six Cooperative Heritage Labs, which are adaptive re-use laboratories aimed at creating transferable and adaptable models across Europe. They are set up in different European regions covering several heritage types, having as a common denominator their collocation outside of main urban and touristic centres. One of the six CHLs selected is the Roman case of the Parco Arceologico of Centocelle, which is part of the wider project Co-Roma, carried out by LabGov in collaboration with ENEA, LUISS University and the local community. It is aimed at developing an idea of collaborative city by applying the five key design principles for the urban commons (urban co-governance, enabling state, experimentalism, poolism, tech justice) and more in general the CO-City Protocol, and creating a smart co-district. In the framework of the project the role of heritage will be explored as well, and new methods of using heritage as a catalyst for social development will be tried. 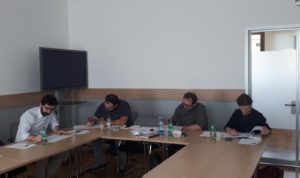 Work has already begun and in the past June, the project’s partners met in Budapest to know each other better, harmonise the approaches and working methods, and set out the guidelines for upcoming steps.

Several key words and concepts have arisen during the Open Heritage First Consortium Meeting, hosted by CEU, such as the important role played by cities in the field of open innovation, the concept of partnership as a new way of working and the importance of the evaluation process. The concepts of participatory heritage management and the possible uses of crowdsourcing were also explored. The days have been organized into site visits and several working sessions, during which the participants have started to define the next steps and strategies to be adopted and implemented during the next four years. They were full and interactive days: during the first day participants visited one of the six Cooperative Heritage Labs, the Pomáz-Nagykovácsi Cooperative Heritage Lab, and learned about the challenges of this peri-urban archaeological site.  The working sessions, instead, were held at CEU, at the end of which participants have participated in guided tours to the discovery of heritage re-use practices in contemporary Budapest.

Christian Darr, from Stiftung Trias, commented on the meeting that: “Within our first european research project we expected three days of work in Budapest – we haven’t been disappointed. But most of all it was really good to see motivated people from all over Europe – with different languages, educations, professions and experiences, but mostly with a common point of view and a strong basis for common work and plans – a little bit like meeting friends. Therefore we are very motivated and can’t wait to start with OpenHeritage!” 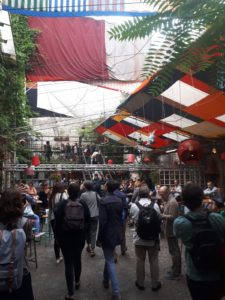 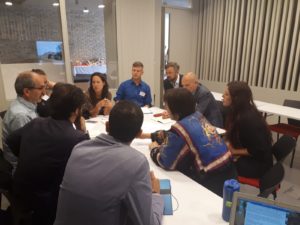