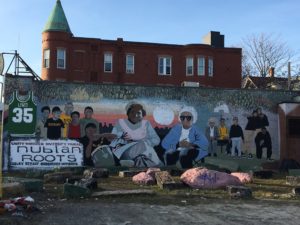 We have already presented the Community Land Trust’s model (CLT), as a membership-based, non-profit organization chartered to hold and manage land in trust for the benefit of a given community, underling how the three elements, land, trust and community, are at the core of the model itself. The main goal is to provide long-term model affordable housing to low-income families using a resale-restricted model and to promote community control over development, while revitalizing neighborhoods (Dwyer, 2015). The land is held in trust by the CLT for the benefit of the community in different ways that ensure that homes remain affordable for future buyers over time. A low income individual or family looking for a house becomes member of the CLT, buys a house in the CLT and leases the land on which the house from the CLT lies. The CLT is always in contact with its member (Gray and Galande, 2011), also after the sale, and in case the residents default on the mortgage it can intervene to prevent foreclosure. Its democratic governance structure reflects the idea that the CLT operates within a community, whose members are part of the decision processes.

In Boston, in the Roxbury and North Dorchester area, there is one of the oldest and most acclaimed urban CLT in the US, the DSNI, Dudley Street Neighborhood Initiative. Its history dates back to 1984, when some brave residents, with crucial support from a few local funders and community leaders, decided to revive their neighborhood, which was devastated by arson, trash and disinvestment.

Boston has always been one of the most expensive cities in the US, with the highest income inequality, partially linked to the lack of affordable housing, and in recent years housing prices have not been decreasing (Bluestone et al. 2015); so much so that, even today, the demand for affordable housing far exceeds the city’s supply and recent data reveal that the real estate market is getting even more expansive. As a result, strong processes of gentrification and displacement invested the city, increasing housing costs for low and moderate income families (who have always been the heart of Boston’s neighborhoods) (Cho, Li and Salzman, 2016). According to the Federal Reserve Bank of Cleveland, Boston has one of the highest rates of gentrifying census tracts (Hartley, 2013). Those who used to be affordable neighborhoods went through a gentrification process, becoming inaccessible.

The Dudley Street area was not excluded from these trends and the neighborhood was full of vacant lots and boarded-up buildings, abandoned cars and dumping. The risk was that all these properties could be sold by the city or their private owners and the area, could be cleaned up and converted into high-price condo, hotels, offices and luxury homes serving downtown Boston. This would have pushed out the numerous lower-income residents of the Dudley neighborhood (that is historically a black and latino area[1]). 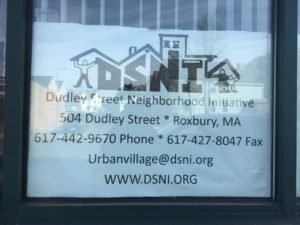 This was the reason at the origin of the DSNI’s birth. The priority soon became to make “development without displacement” (The Dudley Street Neighborhood Revitalization Plan 1987), building new affordable houses and distributing additional housing vouchers for low-income families, incentivizing long-term ownerships among low-income residents and reducing speculative purchasing of homes and vacant lots. Black, Latinos and Cape Verdeans residents became involved in identity-based organizations expressing an active desire to redevelop the area. A tripartite board of governance was established. It was made of equal numbers of representatives of the four main ethnic groups inside the community (African-American, Cape Verdean, Latino and White) and it had 3 main features:

Each board member could (and still can today) vote about every decision taken for the benefit of the community, none can change the rules or decide in behalf of the community. The focus is always on maintaining culture and building community spirit through new opportunities, housing, and youth involvement, making local residents always the primary beneficiaries. Today the board is composed by 34 members (the number can vary at each election), community-wide elections are held every 2 years and the DSNI holds an Annual Meeting. The structure is so organized: 16 residents from the whole area, and then members of non-profit agencies representing the Health and Human Service fields from the core area, members of the Community Development Corporations from the core area, small businesses representatives from the core area, religious organizations from the core area, youths (15-18) from the core area, non-profit organizations from the secondary area and residents appointed by the newly elected board. To note: John Barros, the longest-serving executive director, involved in the DSNI since the age of 14, is now the City of Boston’s Chief of Economic Development. Another aspect worth underlining is the importance given to youth, an investment that can bring enormous long-term benefit. Furthermore, the DSNI partners also with universities (the Tufts University is the more involved, the Department of Urban and Environmental Policy and Planning is carrying out a specific project with the neighborhood, CoRe, Co-Research/Co-Education Partnerships). 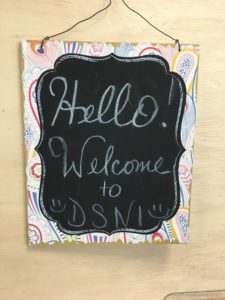 The support of other local entities, at the beginning especially of Community Development Corporations (CDCs) also concerned about both community-building and affordable house (such as Nuestra Comunidad CDC, Dorchester Bay Economic Development Corporation, Madison Park Development Corporation), was crucial. Organizations like the Project Hope also partnered with DSNI and contributed to housing stability in the area, and of great importance was the support of foundations, like the Riley Foundation and the Ford Foundation. The stable affordability of houses is made possible because the land trust owns the land and leases it to the homeowners who just owns the housing structure, but not the land; if they want to move away, the land, property of the CLT, is reassigned to other families (usually through a lottery, in order to avoid discretionary choices). It is important to underline that DSNI is the only community organization in the US to have obtained the city’s power of Eminent Domain, that allows it to manage 64-acre core area (Dudley Triangle) to redevelop it. This allows them to own the land and makes it possible to realize the vision of a development without displacement.

The 1987 comprehensive masterplan in 1996 was updated adding important refinements and renewing the commitment of creating an “urban village”. Today inside the DSNI there are many different groups, communities and institutes working to achieve the community’s goals. The most famous is the Dudley Neighborhood Inc. (DNI), a CLT created in 1988 by DSNI to implement and develop DSNI’s masterplan. Then there are the Resident Development Institute (RDI), the DSNI Sustainable and Economic Development Committee, the FCC – Fairmont Cultural Corridor, the Dudley Real Food Hub, the Dudley Youth Council (DYC), the Greater Boston Community Land Trust Network, the Community Development Children (Dudley Children Thrive – DCT), the College Bound and the Boston Parent Organizing Network,  as well as initiatives like the No Child Go Homeless Campaign, the Dudley Workforce Collaborative, the GOTCHA (Get off the Corner Hanging Around) Youth Jobs Collaborative, the Neighborhood Safety and Beautification, and the most famous, the Multicultural Festival that has held every year to celebrate the vibrancy of the community within the Dorchester and Roxbury neighborhoods.

In 30 years the DSNI transformed vacant lots into bike paths, community centers, playgrounds, community gardens fountains, art programs, a town commons, youth programs, parent meeting, college opportunities, a food project, a school: a real and thriving community. There are more than 3,600 members, and over 400 new homes; each program and communication is held in English, Spanish and creole and the projects managed by the CLT are many and touch different topic, from jobs to academic education help, from youth development to children activities to parents training and support, from food, gardening and urban agriculture, to affordable housing, local facilities and community building. In addition, in the last years the Boston Promise Initiative (BPI) was implemented. It is a strategy designed to create a community of opportunity – centered around strong schools, families, and resident leadership – that allows every child to learn, grow, and succeed. The goal is to transform the Roxbury and North Dorchester neighborhoods into the Dudley Village Campus (DVC), “a learning environment where children are wrapped in high-quality and coordinated health, social, educational, and community supports from cradle-to-college-to-career”.

The DSNI’s mission, as one can read on the website, is to empower Dudley Street residents to organize, plan, create and control a vibrant, diverse and high quality neighborhood, in collaboration with community partners. And what the DSNI did in the last 30 years shows that the goal was not out of sight. Of course there are still problems to face, but the success of this model is demonstrated by the decision of the Mayor Walsh to include the land trusts as the first of six goals for Boston neighborhood development, as presented in the planning report “Housing a Changing City: Boston 2030”, that specifically lauds the DSNI model. As explained in the report, through the neighborhood development program Boston will “Mitigate impacts of gentrification through targeted home buying programs, strategic acquisitions,  community land trusts, tenant assistance, and expanded outreach to seniors” (2014) (Dwyer, 2011).

[1] Of the neighborhoods 24,000 residents, 40% are African-Americans, 30% Latin Americans mostly from Puerto Rico and the Dominican Republic, 24% Cape Verdeans, from islands off the coast of West Africa, and 6% Whites mostly elderly Irish and Italians who have lived in the neighborhood since the 1950s.